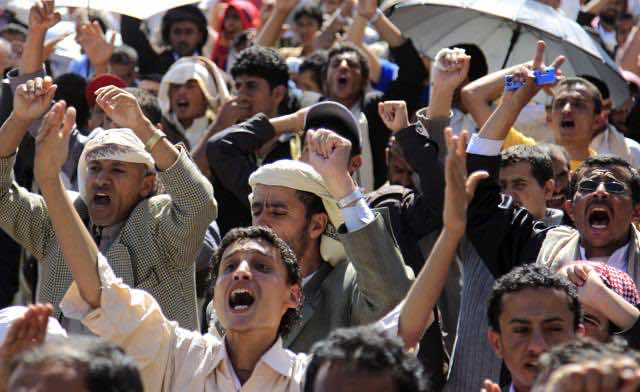 Yemen’s new unity government, formed to try and avert civil war, was sworn in on Saturday, hours after a soldier was killed in continuing violence between supporters and opponents of outgoing president Ali Abdullah Saleh, state news agency Saba said.

Vice President Abd-Rabbu Mansour Hadi, to whom Saleh transferred his powers under a deal brokered by Yemen’s Gulf neighbors, chaired the meeting of the newly sworn-in cabinet at the Republican Palace in the capital Sana’a.

The new 34-member cabinet, which includes members of the opposition, will lead Yemen for a three-month transition period, after which Saleh is expected to formally step down after 33 years in power.

The government faces a host of challenges including sporadic fighting with anti-Saleh tribesmen, a southern separatist movement, a Shiites Muslim rebellion in the north and a regional wing of al-Qaeda that has exploited the upheaval to strengthen its foothold in the poor Arabian peninsula country.

Top oil exporter Saudi Arabia shares U.S. fears that more instability inYemen could embolden the country’s al-Qaeda wing – against whichWashington has waged a campaign of drone strikes – in a country sitting next to oil shipping routes.

Late on Friday, a soldier was killed in fighting between government forces and opponents of Saleh on the streets of the capital Sana’a, the Defense Ministry said.

The violence near government buildings and the compound of Sadeq al-Ahmar, a foe of Saleh who commands significant forces, was the latest challenge to the transition plan after 10 months of bloody anti-Saleh protests.

The Defense Ministry on its website accused the Ahmar tribesmen of launching attacks in the northern neighborhood of Hasaba with the aim of “derailing efforts towards establishing security and stability in the capital and other areas”.

The opposition, in turn, accused troops from the Republican Guard, which is headed by a son of Saleh, of breaking a truce and firing artillery salvos at northern districts of the capital on Saturday, wounding at least one person.

On Friday, an official said that forces loyal to Saleh and opposition gunmen were withdrawing from the streets of the city of Taiz, calming a situation that threatened to wreck the deal which Saleh signed last month to give up power.
A committee set up to restore normality to Taiz was clearing roadblocks set up by Saleh opponents and loyalists during street battles and overseeing their withdrawal from occupied buildings, the official said. Dozens were killed in recent weeks.

More than three weeks after Saleh formally handed power to Hadi, protesters have continued to take to the streets in anger at opposition parties’ endorsement of the deal, which grants immunity from prosecution to Saleh over the killing of demonstrators by security forces.

Saleh’s General People’s Congress (GPC) party said on Friday it would stop holding rallies after weekly Friday prayers to show its commitment to a political solution, and urged opposition parties to do the same.

A member of the opposition Joint Meeting Parties said it was not for the JMP to call off street protests as these were mounted by youths who did not belong to the opposition parties.

Under the transfer plan negotiated by Yemen’s wealthy neighbours, the GPC and opposition parties divided up cabinet posts between them and formed the national unity government to steer the country towards a presidential election in February.

Yemen has also faced a fuel shortage partly due to repeated attacks on a pipeline feeding its refinery. Traders said on Friday that the country was seeking to buy four cargoes of gasoline in January via a tender amounting to 120,000 tons to help deal with the shortages.