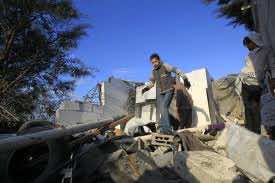 Israeli army planes launched a strike at a “terror-affiliated site” in the southern Gaza Strip Saturday, the military said, after 12 rockets were fired from Gazaat Israel the previous day.

A statement from the military said direct hits were confirmed in the air strike. Gaza medics reported no casualties from the attack, which was at a Kassam training camp.

On Friday, a Palestinian father and his 12-year-old son were killed and 10 other civilians hurt in an Israeli air raid at a militant training ground that caused a nearby house to collapse. Following the Israeli attack, Gaza militants fired 12 rockets at southern Israel. None of the rockets caused casualties or damage.

The Israeli army expressed regret that civilians were hurt but blamed Gaza’s Hamas rulers for operating within residential areas. It said the Friday strikes were in response to five rockets fired Thursday night on southernIsrael, none of which had caused casualties or damage.

Palestinians survey a house damaged by a blast from an Israeli air strike on a nearby Hamas training camp in Gaza City. (Reuters)

The rockets were in turn retaliation for an Israeli air raid earlier in the day that had targeted a car in Gaza City, killing two militants and wounding another four people.

Israel frequently targets militants it says are about to fire rockets over the border, or attacks Gaza in response to such rocket fire. It also carries out targeted attacks against specific militants.

Palestinian militants stepped up rocket attacks as night fell. Three groups said they had fired more than a dozen projectiles across the border. Israel police said at least ten of them landed in Israeli territory, causing no casualties.

Ismail Haniyeh, head of the Hamas administration in Gaza, told reporters the group was “pursuing intensive contacts with several Arab and international parties, and we stress the necessity of this aggression being stopped immediately”.

Hamas spurns peacemaking with the Jewish state but has in the past proposed truces as it sought to consolidate control over Gaza and negotiate power-sharing with the rival, U.S.-backed Fatah faction of Palestinian President Mahmoud Abbas.

Earlier on Friday, the United States said its Middle East peace envoy would head back to the region next week in the latest bid to restart long-stalled talks between Israel and the Palestinians.

Hale will afterward travel to Cairo and Paris for further consultations.

The trip is part of “our effort to get the two parties to put forward concrete proposals and to agree to come back to the table together,” Nuland said.

The Quartet – composed of the United Nations, United States, European Union and Russia – laid out a proposal in September aimed at reaching a peace agreement in a year.

But there has been no visible sign of progress, with the Palestinians urging Israeli Prime Minister Benjamin Netanyahu to halt Jewish settlements on Palestinian land before a resumption of peace talks.

Israel on Wednesday approved a new 14-home project in the heart of a Palestinian neighborhood in annexed east Jerusalem, leading the Palestinians to threaten again to take the row to the U.N. Security Council.

The United States vetoed a resolution on settlements in February and has championed the Quartet plan after Mahmoud Abbas sought the U.N. nod for full membership as a state.