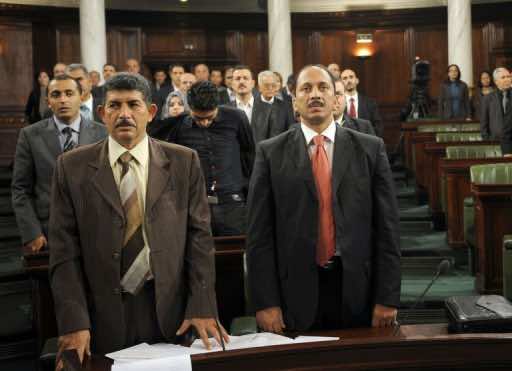 Tunisia’s constituent assembly on Saturday adopted a provisional constitution that will allow the north African country to name a government, a month and a half after its first post-revolution
election.

The 217-member assembly approved each of the 26 clauses of the document individually to get state institutions back on the move before voting on the entire basic law.

The vote came after a five-day often tumultuous debate which saw hundreds of people demonstrating calmly outside the assembly building shouting slogans demanding “Freedom and Dignity”.

“The people are sick of waiting. Let’s get down to work, enough messing around,” one lawmaker from the dominant moderate Islamist Ennahda party, Amar Larayedh, shouted shortly after the session began.

The outgoing government of Beji Caid Essebsi, formed in the wake of the ouster on January 14 of dictator Zine el Abidine Ben Ali, has officially resigned and many Tunisians have expressed growing impatience at the institutional limbo.

The election of a president and creation of a new government can only take place once lawmakers adopt the “mini-constitution”, laboriously drawn up over two weeks after the elections.