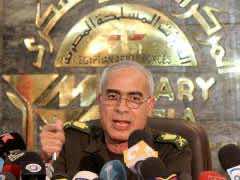 The army has said only parliament will choose the make-up of a constituent assembly, appearing to retreat from earlier statements that riled Islamists and others when a general said unelected bodies would have a role in the selection process.

Under an interim constitution, parliament is responsible for picking the 100-strong assembly that will write a new constitution to replace one that helped keep Hosni Mubarak in power for three decades.

But a general last week had suggested parliament’s role would be diluted by saying the army-backed cabinet, a consultative body to the ruling generals and parliament, would first agree on criteria for selection before any appointment.

That angered Islamists who are on course to secure a parliamentary majority inEgypt’s staggered election. It was the second time the army has become embroiled in a row over the new constitution and then backtracked.

“The only body responsible for choosing the constituent assembly is parliament and its elected members,” General Mamdouh Shaheen was quoted telling television at the weekend.

His remarks were published by state-run Al Ahram and other newspapers on Sunday. The independent Al-Masry Al-Youm said Shaheen was “backtracking” on comments that caused the stir and which were made by General Mokhtar al-Mullah last week.

“The consultative council, the government and the military council will not have any opinion in choosing members of the constituent assembly writing the new constitution,” Shaheen said, according to Al Ahram.

“The consultative council’s role is limited to presenting views and suggestions, with no legislative role, and it will not contest parliament’s jurisdictions,” the general said.

The consultative council is a civilian body being set up by the army to advise them during the transition. Islamist politicians have said they will not join the council.

Before the latest row, the army-backed cabinet had made proposals for who should be in the constituent assembly and had proposed articles for the new constitution that would have permanently shielded the army from civilian oversight.

Those proposals prompted a blizzard of criticism and led to violent protests against army rule in November that killed 42 people. The ideas were dropped and the army has since insisted they had only been non-binding ideas.