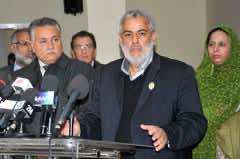 The National Council of the Popular Movement (MP) unanimously approved, on Sunday, the decision to participate in the upcoming government, led by Secretary General of the Justice and Development Party (PJD) Abdelilah Benkirane.

This approval came after the political bureau “positive” response on Tuesday to the invitation of Benkirane to take part in the upcoming cabinet.

MP’s National Council, which held a meeting in Rabat, said that the participation in the PJD-led government entails the withdrawal from the Alliance for Democracy, an eight-party coalition made up of the National Rally of Independents (RNI), the Constitutional Union (UC), the Party of Authenticity and Modernity (PAM), the Popular Movement (MP), the Party of Renaissance and Virtue (PRV), the Labour Party (PT), the Socialist Party (PS) and the Green Left (PGV).

On Saturday, the central committee of the Progress and Socialism Party (PPS) approved by a large majority a decision to take part in the upcoming government

The decision is pending approval by the PPS Political Bureau.

PPS Secretary General, Nabil Benabdellah said that the central committee’s decision is based on the PPS commitment to serve the nation’s interests.

He made it clear that the PPS will remain faithful to its identity and will be a fervent defender of liberties, equality social justice and dignity for all citizens.

The party’s participation in the PJD-led government also falls within the framework of pursuing and strengthening the democratic reforms and implementing the new constitution.

The Political Bureau of the Popular Movement (MP) agreed to participate in the government of Benkirane, while the National Council of Independence Party (PI) will hold a meeting to decide about their participation in the upcoming cabinet.

The Socialist Union of Popular Forces (USF), which formed the Koutla coalition along with the IP and the PPS, announced that it will join the opposition.

The PPS and the MP secured 18 and 32 seats respectively in Morocco’s legislative elections of November 25, the first after the approval of a new constitution by the Moroccan people on July 1.

The PJD,a moderate Islamist party, won the majority with 107 of the 395 parliament’s seat.