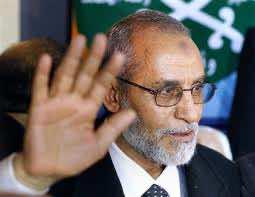 Egypt’s Islamists said on Sunday they would not accept any interference from the ruling military council over the future constitution amid uncertainty about the army’s role in the process.

“No one except the elected parliament has the right to draft legislation,” Khairat al-Shater, the number two in the Muslim Brotherhood, Egypt’s biggest Islamist movement, said on Twitter.

Major General Mukthar al-Mulla, a member of the ruling military council told reporters on Wednesday that the army would have final say over those appointed to a 100-member panel tasked with writing the constitution next year.

The statements prompted the Brotherhood’s Freedom and Justice Party to pull out of an advisory council, which would have a supervisory role in drafting the constitution.

But on Saturday, another member of the Supreme Council of the Armed Forces (SCAF), General Mamduh Shahin, said the army would have “no opinion” regarding the members of the panel.

The Muslim Brotherhood said it would stand firm in calling for a parliament with full powers and that the military should be judged by its actions.

Shahin’s statements “were good. But it is not words that count, it is actions,” Mohamed al-Beltagui, a senior leader in the Muslim Brotherhood, told AFP.

He noted that the army-backed advisory council had met on Sunday to discuss the criteria for the constitution-writing panel.

“We have a parliament that will be elected within a month, and the panel that will write the constitution should be chosen by parliament,” Beltagui said.

The next parliament is likely to be dominated by the FJP, which won 36 percent of votes in the first of three rounds of elections, followed by the ultraconservative Salafist Al-Nur party with at least 24 percent of the vote.