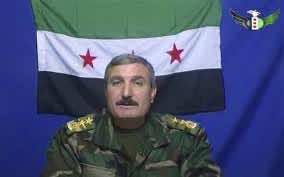 Hundreds of army defectors in southern Syria have fought with loyalist forces in one of the biggest armed confrontations in a nine-month uprising against President Bashar al-Assad, residents and activists said.

Troops, mainly from the 12th Armoured Brigade, based in Isra, 40km from the border with Jordan, stormed the

nearby town of Busra al-Harir, the Reuters news agency reported.

Al Jazeera’s Nisreen El-Shamayleh, reporting from near the Jordan-Syria border, said that the clash started when “tens of tanks mounted with machine guns opened fire in that area earlier on Sunday morning to try to put an end to a general strike” called for by the opposition.

The sound of explosions and heavy machine guns was heard in Busra al-Harir and in Lujah, an area of rocky hills north of the town, where defectors have been hiding and attacking military supply lines.

At least 22 people were killed by government troops on Sunday, including a woman and four children, activists said. Nine of them were killed in the city of Homs, six in Hama, three in Deraa, two in Idlib and another two outside of Damascus.

At least five Syrian soldiers, including a military officer, were also reportedly killed.

Earlier on Sunday, activists across the country launched a general strike to step up pressure on the country’s government to end its deadly response to anti-government protests.

The Local Co-ordination Committees (LCC), a Syrian rights group, organised the civil disobedience campaign, including the closure of shops and universities in protest, as well as sit-in demonstrations across the country.

“This strike is really a desperate action, a desperate cry from the Syrian people, the last civilian action we could do,” Ashraf al-Moqdad, a member of the Syrian opposition calling for civil disobedience, told Al Jazeera.

“We’ve been demonstrating peacefully for nine months. Thousands of us have been murdered by Assad and his thugs. We’ve been waiting for real concrete action from the international community … What else can we do?

“This is part of our desperate action to get the attention of the international community to look at us. Please look at our situation. We are desperate now.”

Security forces in Syria told striking shopkeepers on Sunday to open up their stores or they would be smashed.

“We heard reports that troops burned down at least 178 stores and shops in Deraa to try and take revenge against civillians who have shut down their stores and shops and are basically observing this general strike,” our correspondent said.

Syria has barred most independent journalists from the country, making it difficult to gauge the extent of participation in the strike.

But a witness who toured Damascus said most shops were closed in the main shopping street of the old Medan quarter in the centre of the capital where there has been a heavy security presence. The main souq in Old Damascus remained open.

Central parts of the capital Damascus and the business hub Aleppo seemed calm though there are reports of strikes taking hold in some areas on the outskirts of both cities.

“There is nothing going on,” said Rula, a schoolteacher in Damascus. “Nothing seems out of the ordinary.”

The opposition used Facebook and online video to call for an open-ended “Strike for Dignity” to begin on Sunday.

The LCC has predicted the campaign will gather pace and said the strike was “the first step in an overall civil disobedience” campaign to overthrow the government.

Navi Pillay, UN human rights commissioner, has said that “much more than 4,000 people” have been killed in the government crackdown on dissent in Syria since protests broke out in March.