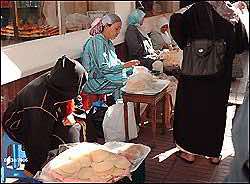 At the Moroccan market, it is not uncommon to find women selling secondhand clothes and household items. Moroccan women of all ages and backgrounds engage in this business to support themselves and their families. These sellers are known in Moroccan culture as Ferashat women. Ferashat refers to the sheet or tarp the women stretch out at the market and fill with secondhand goods for sale. This humble business is common because it doesn’t require any capital—all that is needed is a tarp and a space at the market.

Women are compelled into this form of commercial activity due to poverty. Some of them are divorced; others are married but need to supplement their husband’s income to get by. “I do this business to feed my children. After the death of my husband, I’ve had to go out and do any halal [legal] business possible to feed my kids,“ Khadija, a widow from Rabat, said while arranging items for sale on her sheet at the market.

A number of Ferashat women are young, but look much older due to life’s hardship. Many of these women turn to Ferashat selling after unsuccessful experiences as housemaids or working in cafes. “I used to work in a cafe washing cups and dishes but was forced to leave after my boss told me not to bring my kids with me to the cafe. Plus, the pay was not good: I used to work nine hours a day to get 150 Dirhams [18 US dollars] a week. Now, I can work and at the same time take care of my children,” Naima said.

Some women go to the market in the early morning, but others must see to their family’s needs first, and don’t make it to the market until noon. Ferashat women learn to be patient and content with small rewards. Often they wait all day and leave the market with only a few Dirham, or none at all. “Sometimes we get twenty or thirty Dirhams [two or four US dollars] and sometimes we do not sell anything. Alhamdulillah [praise to God], I have my own house and I do not need to worry when the end of the month comes. But many women do worry!” Halimaa, a woman in her thirties, said.

For example, Zehour, another Ferashat woman, said, “I am renting one small room for myself and my two kids. Last month, I could only pay half my rent, and my landlord became angry. Now I must make payments towards what I owe every day.

Ferashat women are forced to occupy unauthorized spaces because there are no places given to them by the government to do their business. Most women lay their plastic covering outside shops which creates conflict with the shop owners. Learbj, one of these shop owners, said, “We are tolerant because we know they have children, but sometimes they block the way to the shop with their wares.” And the women themselves will often fight over the most strategic selling spaces. “Those women fight every day and I wonder why they come here, they sell nothing and just chat,” Allal Leatar, another shop owner said.

Also, the practice of Ferashat is illegal and the police do not tolerate the makeshift businesses. The women are often able to flee as the police arrive, but the police will destroy their products—step on them or throw them away. Ferashat women must also compete with Ball merchants who sell used clothes professionally on a on a larger scale. Plus, drug addicts threaten and abuse the women, and they often must pay to be left alone. “When darkness comes, drugged people appear from nowhere and force us to give them money and if you refuse, they might hurt, even stab you,” Zahra said. The weather, too, makes Ferashat difficult. “Usually we close our doors and stay at home when it is raining and pass the day with Lieta alleh [what God offers],” Helima said.

Despite its difficulties, women have no alternative to Ferashat but begging or selling their bodies. The work teaches self-reliance, important in a country that gives little thought to women and is not even aware that many must stretch out their cloths to earn a few Dirhams and make their living.

Mohammed Qasserras teaches English in Rabat. He received a B.A. in English Studies and Culture. He has published a number of articles and short stories in different publications. In 2009, he was selected as the best Moroccan writer (short story category) by British Council in England with an incorporation with the university of London in Paris which allowed him to participate in Médi-Café Trans-Maghreb Creative Writing Project where  writers from Morocco, Algeria, Tunisia and Britain were brought together. In 2010, Quasserras was a visiting Fulbright Scholar at City University of New York teaching Arabic studies. While in the U.S., he studied American foreign policy, anthropology and modern Arab history.

This story is © Morocco World News