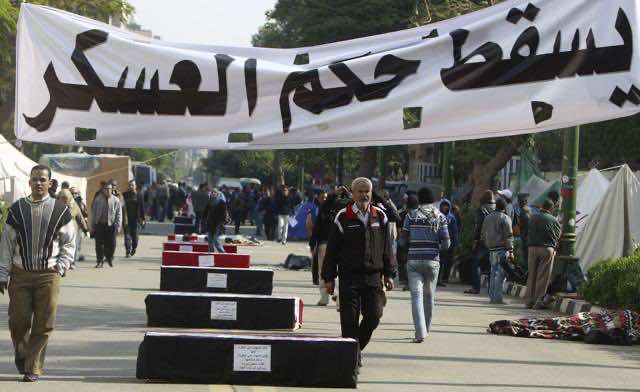 Egypt’s Islamists said on Sunday they would not accept any interference from the ruling Supreme Council of the Armed Forces (SCAF) over the future constitution amid uncertainty about the army’s role in the process, as the SCAF’s newly formed advisory council convened for the first time.

“No one except the elected parliament has the right to draft legislation,” Khairat al-Shater, the number two in the Muslim Brotherhood, Egypt’s biggest Islamist movement, said on Twitter.

Major General Mukthar al-Mulla, a member of the ruling military council told reporters on Wednesday that the army would have final say over those appointed to a 100-member panel tasked with writing the constitution next year, according to AFP.

The statements prompted the Brotherhood’s Freedom and Justice Party to pull out of the advisory council, which would have a supervisory role in drafting the constitution.

According to FJP member Amr Zaky, their withdrawal came as a response to the new, extra authorities granted the advisory council.

Zaky explained that the advisory council’s authorities had ?been amended to allow the SCAF to infringe upon powers that should only belong to the incoming parliament. Such a move, he asserted, would be widely considered “a circumvention of the people’s will,” according to Egypt’s al-Ahram daily.

But on Saturday, another member of the SCAF, General Mamdouh Shahin, said the army would have “no opinion” regarding the members of the panel.

The Muslim Brotherhood said it would stand firm in calling for a parliament with full powers and that the military should be judged by its actions.

Shahin’s statements “were good. But it is not words that count, it is actions,” Mohammed al-Beltagui, a senior leader in the Muslim Brotherhood, told AFP.

He noted that the army-backed advisory council had met on Sunday to discuss the criteria for the constitution-writing panel.

“We have a parliament that will be elected within a month, and the panel that will write the constitution should be chosen by parliament,” Beltagui said.

The advisory council on Sunday elected a former information minister, Mansour Hassan, as its president.

Ashour told Egypt’s al-Masry al-Youm daily that they were elected in a secret ballot.

The council’s secretary general will act as liaison between the council and the SCAF. The council is to convene at least once a week, but may meet whenever the need arises or upon the request of one-third of its members or the head of the SCAF.

Twenty-four of the council’s 30 members were present at the first meeting. Among the most notable absentees were Coptic businessman and founder of the Free Egyptians Party Naguib Sawiris, presidential hopeful Amr Moussa, and president of al-Wafd Party al-Sayed al-Badawy.

The idea of establishing an advisory council to “assist” the SCAF was first floated following last month’s clashes between security forces and anti-SCAF protesters in which more than 40 of the latter were killed. The incident triggered an enormous demonstration in Cairo’s Tahrir ?Square on Nov. 19 to demand an end to military rule.

The proposed council was initially presented as one that would include revolutionary political figures to “advise” the SCAF until executive power could be handed over to an elected, civilian authority. Shortly after the initial proposal, however, statements by SCAF spokesmen suggested the advisory council might aspire to more than just an advisory role.

Islamist thinker and advisory council member Selim al-Awa, however, challenged this assertion, noting that the SCAF would soon release an official statement refuting such claims – a contention later confirmed by Shahin’s televised statements on Sunday.

Several political figures, meanwhile, have turned down offers to join the nascent advisory council, arguing that the council only serves to lend legitimacy to the ruling SCAF, al-Ahram reported.

Ahmed Bahaa Eddin Shaaban, member of both the National Association for Change reform movement and Egypt’s Socialist Party, issued a statement late last week in which he cited eight reasons why political figures should not join the advisory council.

According to Shaaban, the SCAF is a “counter-revolutionary” force “responsible for all those killed and injured during the past months.” Shaaban stressed that joining the advisory council would only serve to legitimize the SCAF and thus prolong military rule.

Along with Shaaban, several other young revolutionary activists – citing similar reasons – have also turned down formal offers to join the council.
The next parliament is likely to be dominated by the FJP, which won 36 percent of votes in the first of three rounds of elections, followed by the ultraconservative Salafist al-Nour party with at least 24 percent of the vote.