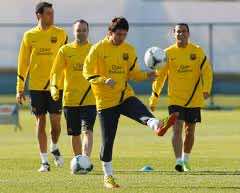 Barcelona coach Pep Guardiola resisted the temptation to bask in Saturday’s electrifying 3-1 ‘Clasico’ victory over Real Madrid after arriving in Japan for the Club World Cup.

The European kings overcame Real at the Bernabeu at the weekend to leapfrog their bitter rivals at the top of La Liga, albeit having played a game more.

But Guardiola insisted Barca were already focusing on a different threat in the Far East and the task of winning their second Club World Cup in two years.

“Real Madrid were the team of the 20th century and it is true we have enjoyed some success over them recently,” Guardiola told a packed news conference on Monday.

“But there’s hardly any difference between the two teams. Real Madrid are a great team, we know that,” he added after his eighth win in 12 ‘Clasicos’ since taking over in 2008.

“We have just have to get the players ready for this tournament now. We are here to win the Club World Cup. I want the players to relax and get over their fatigue properly.”

Barca arrived in Japan late on Sunday having jetted out of Spain immediately after their clash with Real.

“We will do a little sightseeing inTokyo, have some traditional Japanese food in the city to adjust from the tough trip and be ready to do the job,” said Guardiola.

Guardiola admitted he knew little of Asian champions Al Sadd, who could opt for damage limitation when they face the Spanish title holders in Thursday’s semi-final inYokohama.

“We haven’t analysed our opponents yet,” said Guardiola, once a player for Al Sadd’s Qatari rivals Al Ahli from 2003-05.

“Lionel (Messi) and everyone are fit but we will look at team selection after studying our opponents and after looking at the players in training.”

Brazil’s Santos will be expected to overpower Japanese champions Kashiwa Reysol in Wednesday’s first semi-final to set up a mouth-watering final on December 18.

Guardiola promised a better performance than in 2009, when Barca struggled to beat Argentina’s Estudiantes 2-1 inthe final after extra time.

“I remember it was very hot and we made some mistakes preparing which we will make sure doesn’t happen again,” he said. “We will be ready for the semi-final.”

Captain Carles Puyol said beating Real again had given the Catalan giants a major confidence boost before the 20,000-kilometres round trip to Japan.

“To win against a team like Real Madrid has given us a big lift,” he said. “It’s helped keep the players motivated to come to Japan and win the Club World Cup.

“It has been a long road. We had to beat the best teams in Europe to win the Champions League. Now we have to prove we’re the best team in the world by lifting the trophy.”

The anticipation of a showndown against South American champions Santos and their version of Barca’s Lionel Messi –Brazilstriker Neymar — drew a wry smile from Puyol.

“Neymar is different class, pure and simple,” purred Puyol. “He does things most players can’t. He is always trying to score. He’s very dangerous, just a brilliant player.”