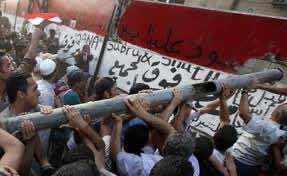 Israel’s new ambassador to Egypt, Yaakov Amitai, arrived in Cairo on Monday to take up his post, an AFP correspondent said.

Speaking in Arabic, Amitai told journalists that he “hopes to further the peace between the two countries” after a strain in ties over the past few months.

Israeli officials have expressed concern over the crushing victory of Islamist parties in the first stage of Egypt’s parliamentary elections, which wrapped up last week.

But Amitai said that peace between the two neighbouring states remains “solid as it is based on common interests.”

The priority for bilateral relations between Egypt and the Jewish state is “the consolidation of peace”, he added.

Egypt in 1979 became the first Arab country to sign a peace treaty with Israel, but relations have been strained following the ouster in February of veteran president Hosni Mubarak in a popular uprising.

Amitai begins work in Egypt amid the Arab Spring revolts, which brought down authoritarian regimes in Tunisia, Libya as well as Egypt.

Amitai replaces Yitzhak Levanon, who left Egypt following a September 9 attack on the Israeli embassy in Cairo, where crowds smashed through an external security wall forcing the evacuation of all embassy staff.

It was the worst incident since Israel set up its mission in Egypt following the 1979 peace deal.