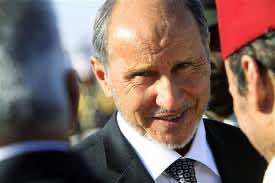 About 200 Libyans on Monday gathered in the eastern city of Benghazi — the cradle of uprising against Moamer Kadhafi — to protest against the National Transitional Council and its head Mustafa Abdel Jalil.

The angry protesters were chanting slogans against Abdel Jalil and accused the NTC of not being transparent, an AFP correspondent at the scene reported.

“Abdel Jalil has lot of questions to answer. The regime has not changed. It is the same which oppresses and marginalises cities,” said Tahini al-Sharif, a lawyer from Benghazi.

She said the protesters were furious over Abdel Jalil’s remarks that Kadhafi fighters be forgiven.

“Abel Jalil is asking us to forgive Kadhafi fighters. Would he say the same thing if his son was killed or wounded in the revolution?,” Sharif said as behind her the crowds chanted “NTC must quit. Jalil must go out!”

On Saturday, the NTC launched the first post-Kadhafi conference on national reconciliation in which Jalil said the new Libyan rulers can forgive the fighters of the slain dictator who fought the rebels during the uprising against him.

“In Libya we are able to absorb all. Libya is for all,” Abdel Jalil said at the conference.

“Despite what the army of the oppressor did to our cities and our villages, our brothers who fought against the rebels as the army of Kadhafi, we are ready to forgive them,” he said.

“We are able to forgive and tolerate,” he added.

Jalil is the chief of the NTC which has been ruling Libya since the revolution erupted against Kadhafi from Benghazi and spread across the North African country before ending with the former leader’s killing on October 20 in his hometown of Sirte.

Monday’s protest was being held in a key square in downtown Benghazi where the first anti-Kadhafi demonstration was held on February 15.