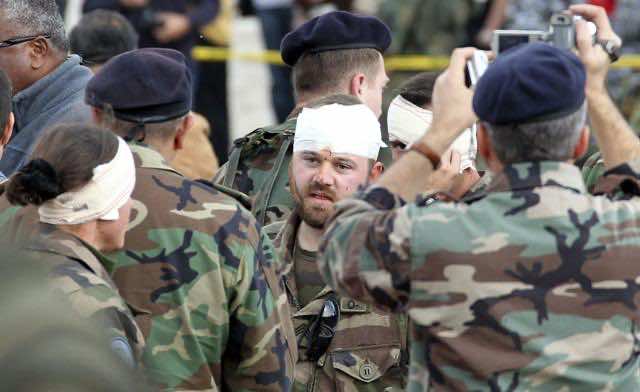 Syria on Monday denied involvement in a bombing that wounded five French U.N. peacekeepers in southern Lebanon a day after France’s remarks that Damascus was possibly behind the attack.

“Syria has no link whatsoever with this act which we condemn,” foreign ministry spokesman Jihad Makdisi said in a statement that also criticized French Foreign Minister Alain Juppe for pointing a finger at Damascus.

A Foreign Ministry statement said Damascus “categorically denies any Syrian connection to this act,” according to Reuters news agency.

Juppe had raised speculation on Sunday that Syria was behind the bombing.

“We have strong reasons to think that this attack came from there,” he told the TV5 Monde television channel and Le Monde newspaper, stressing that Damascus used the Lebanese Hezbollah for such attacks in the past.

“I don’t have proof,” he stressed, while adding that the group was “Syria’s armed wing.”

Five French members of the United Nations Interim Force in Lebanon (UNIFIL) were wounded Friday when a bomb targeted their patrol on the outskirts of the Lebanese coastal city of Tyre. Two passers-by were also wounded.

In his statement, Makdisi said that “remarks by Mr. Juppe and others are within the framework of premeditated French accusations made to mask the reality concerning Syria.”

No group has claimed responsibility for the attack, the third this year on UNIFIL soldiers.

France, alongside Britain, Germany and the United States, has led a push for the U.N. Human Rights Council to take up the issue of Syria again.

In October, Russia and China vetoed a resolution that would have condemned Damascus’ crackdown on pro-democracy protesters and threatened possible sanctions.

U.N. Human Rights Commissioner Navi Pillay has said more than 4,000 people have been killed in a government crackdown on dissent in Syria since an anti-regime protest movement broke out in March.

Juppe also said the embattled Syrian President Bashar al-Assad had lost all legitimacy and Paris was pushing Russia to change its stance at the United Nations where Moscow has refused to endorse any Security Council resolution against Syria. .

“We are trying to convince Russia to get out of the isolation that it’s put itself in,” he said.