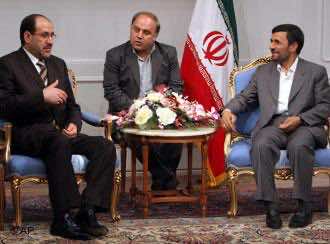 Iraqi Prime Minister Nouri al-Maliki fears that the fall of the Syrian regime could spark an internal sectarian war which could expand into a wider conflict in the Middle East between Sunni Muslims and the Shia sect.

Al-Maliki recently admitted that should the fall of President Bashar al-Assad’s regime lead to an increase in sectarian tensions across the region, Iraq could be forced into a Shia alliance, most probably led by Iran, against the Arab world’s Sunni states.

While the Iraqi prime minister has given al-Assad his support and is exploring ways of circumventing international sanctions by creating economic corridors through which Syria can trade, al-Maliki has not gone so far as to pledge Iraq’s allegiance along sectarian lines.

Instead, al-Maliki, who opposed the Arab League’s suspension of Syria and international sanctions against the al-Assad regime, has positioned himself as a mediator. The Iraqi prime minister announced recently that his government was ready to meet with the Syrian opposition to try to reach a solution and avoid more bloodshed, not only in Syria but also in Iraq’s Anbar province, where Sunni militants still harbor secessionist intentions, and in the wider Middle East.

He has also attempted to steer a neutral course between the growing rivalry between the Saudi and Iranian governments for influence in the Middle East; al-Maliki is acutely aware that many of his people still view Iran with distrust with memories of the catastrophic eight-year war between the two neighbors in the 1980s which claimed over a million lives still raw.

Al-Maliki is also wary of allowing his nation to become beholden to another state, especially as Iraq is so close to finally getting rid of the US presence which has influenced so much of Iraqi life for almost nine years.

“Iraq is not a follower of any country,” he told reporters recently. “Clearly, we are no enemy to Iran and we do not accept that some who have problems with Iran would use us as a battlefield. Some want to fight Iran with Iraqi resources as has happened in the past. We do not allow Iran to use us against others that Iran has problems with, and we do not allow others to use us against Iran.”

However, hard-line Shia leaders in Iraq, such as the influential cleric Moqtada al-Sadr, have been less cautious about taking sides and more scathing in their condemnation of the Arab League’s action against al-Assad – who al-Sadr recently called a “brother.”

Al-Sadr released a statement last week saying that he believed that al-Assad was being targeted because of his opposition to the United States and Israel and as such the upheaval in Syria had little in common with what he called the “great revolutions in Tunisia, Egypt, Libya, Bahrain and Yemen.”

Others have gone as far as to accuse the Arab League of implementing a Saudi-led plot to weaken Iran through its destruction of Syria, Tehran’s closest regional ally, and replacing the Shia-offshoot Alawite leadership in Damascus with one which follows Wahabbism, the Saudi-inspired puritanical strain of Sunni Islam.

Iraq’s Shia leaders are concerned that should Syria fall into the hands of Saudi-supported Wahabbists, Sunni enclaves in the west of Iraq will become empowered by the shift in power and will look to strengthen their position in Iraq once more through force.

Since Saddam Hussein’s Sunni Arab government was overthrown in the 2003 US invasion, the power in Iraq has passed to the country’s Shia majority, with leaders such as al-Sadr openly enjoying the support of the mullahs in Tehran.

While Iraq’s history with Iran makes any direct relationship with Tehran complicated, there are enough influential Iraqi leaders with strong ties to Iran to support an alliance should a Sunni-Shia split in the region force the creation of one.

“Iran has a great deal of leverage in Iraq which it exercises in a variety of legitimate and semi-illegitimate ways,” Dr. Kristian Ulrichsen, a Middle East expert at the London School of Economics, told Deutsche Welle. “These range from close ties with Shiite political and militant organisations, to commercial agreements, and the outright placing of Iranian-linked officials in key positions across Iraq.”

Any expansion of Saudi influence in the region will put increased pressure on Iran to form allegiances elsewhere. Should Syria become a Sunni-led state, with leanings towards Saudi Arabia and the other Sunni monarchies in the Gulf, Iraq will not only become the buffer zone between Saudi Arabia’s widening sphere of influence and Iran, Riyadh’s greatest regional foe, but also the most likely candidate to take Syria’s place as Iran’s closest regional ally.

“Stirring up trouble in Iraq would be an obvious first step for Iran, not least because it could severely embarrass Washington as the last US forces depart,” Richard Gowan, a Middle East expert at the European Council for Foreign Affairs, told Deutsche Welle.

Experts say that Tehran has a vested interest in keeping the power in Baghdad firmly in the hands of those Shia leaders with ties to the mullahs and could actively seek to counter any Sunni advances in Iraq – whether al-Maliki likes it or not.

“Iran would undoubtedly feel threatened by any removal of its closest Arab ally, and might indeed seek to escalate or deepen its influence in Iraq to compensate,” Ulrichsen said. “Iraq and Iran already maintain a dense network of political, commercial and security ties, and these may become institutionalised into a more formal alliance.”

According to Gowan Iran is increasingly concerned that its position and influence are very much dependent on events in Syria.

“If the Assad regime in Syria does fall, as now seems increasingly likely, Iran’s ability to shape events in the Middle East could be significantly damaged,” he added. “There is a risk that it could respond by using its allies to create regional instability.”

The fall of al-Assad could also ignite other sectarian flashpoints across the region and lead to increased tensions and even the wider conflict that al-Maliki fears.

The situation in Bahrain would be the most obvious example as the ruling al-Khalifa family have opted for a policy of dividing the opposition to their rule on sectarian lines, and for blaming internal unrest on external Iranian meddling.

In Lebanon and Gaza, the fall of the Syrian regime would lead to Hezbollah and Hamas needing to find new state sponsors or hosts. While Iran would continue to lend its support, were Hamas or Hezbollah to seek new patrons it would destabilize that country’s relationship with Israel, the rest of the Arab world, and the West.