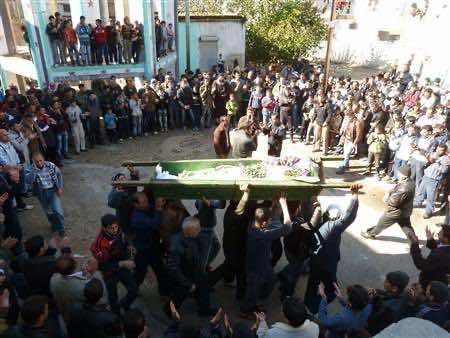 Syrian troops and army defectors have fought one of the biggest battles in Syria’s nine-month uprising while a protest strike shut businesses in a new gesture of civil disobedience, residents and activists said.

The general strike took place in several Syrian cities and has terrified the regime as the Hama governor threatened to seal off the stores in the city and forces threatened to set these stores on fire, Ali Hassan, spokesman for the Syrian Revolution Council, an opposition group, told Al Arabiya in an interview.

In Sunday’s fighting, Syrian troops mainly from the 12th Armored Brigade based in Isra, 40 km (25 miles) from the southern border with Jordan, stormed the nearby town of Busra al-Harir.

A housewife in Busra, who did not want to be named, told Reuters by telephone that the town was being hit by machinegun fire from tanks. Her children were crying.

The sound of explosions and heavy machineguns was heard there and in Lujah, an area of rocky hills north of the town, where defectors from the army have been hiding and attacking military supply lines, residents and activists said.

“Lujah has been the safest area for defectors to hide because it is difficult for tanks and infantry to infiltrate. The region has caves and secret passageways and extends all the way to Damascus countryside,” said an activist, who gave his name as Abu Omar.

Opposition activists said they had shut down much of the capital and other towns with a strike, the biggest walkout by workers since the protest movement demanding Assad’s removal erupted in March.

Syria has barred most independent journalists, making it difficult to gauge the extent of participation in the strike. Official state media made no mention of it.

“For the first time we have seen business close in multiple districts in Damascus and spread to most of the suburbs and provinces. The aim is to reach civil disobedience that encompasses all sectors and forces the regime down,” said Rima Fleihan, a member of the opposition Syrian National Council.

“The cost will be more human lives but I am afraid it is less costly than an armed uprising and the regime dragging the country into a Libya-type scenario,” she said.

Assad has been widely condemned abroad for what Western and Arab countries describe as a crackdown on peaceful protests. His government says it is defending Syria from a foreign-backed insurgency by armed militants.

Meanwhile, the Secretary General of the Organization of Islamic Conference Ekmeleddin Ihsanoglu expressed his grave concern over the reports of security deterioration in Homs, Al Arabiya reported.

Ihsanoglu called on the Syrian authorities to stop the bloodshed. He reminded the Syrian government of the vows it gave during the organization’s executive committee meeting in early December.

The United Nations says more than 4,000 Syrians have been killed since March. Assad says the number of dead is far lower and most of them have been from the state security forces.

Syria faces sanctions from Arab nations in response to its violent crackdown on protests against President Assad.

The Arab League repeatedly has extended deadlines for Syria to agree to a plan that would see Arab monitors oversee its withdrawal of troops from towns. The latest expired on Dec. 4.

MENA said that a small group of ministers would meet first on Saturday, followed by a broader meeting of ministers led by Qatar from the 22-member League the same day. Syria has been suspended from the League.

Syrian Foreign Minister Walid al-Muallem wrote to the League saying Damascus was prepared to sign an agreement that would allow League monitors into Syria, on certain conditions.

Syrians go to polls amid strikes

Meanwhile, Syrians were voting Monday in municipal elections held amid a general strike called by the opposition and as security forces killed another seven people as they pursued a crackdown on dissent.

The elections committee, in a statement received by AFP, said “voting is proceeding in a democratic spirit,” adding that voting turnout was “good.” It did not elaborate.

The Syrian Observatory for Human Rights said seven people were killed in the flashpoint regions of Homs and Idlib on Monday, while strikes were observed in Daraa, cradle of nine months of anti-regime protests, and near Damascus.

Information Minister Adnan Mahmud told AFP the elections were part of a reform package pledged by the authorities to promote democracy and would be followed by legislative polls in February.

“These elections are taking place on time in line with a reform program,” Mahmud told AFP.

“They are taking place although some are trying, in vain, to stop them through terrorist acts carried out by armed groups who are terrorizing the citizens,” he said.

Last week local administration minister Omar Ghalawanji said a special indelible ink would be used for the first time in the municipal elections “to prevent any fraud.”