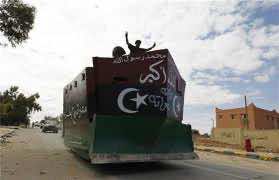 The fighting, which broke out on Saturday near Zintan, a town 120 kilometres (75 miles) southwest of Tripoli, involved the former rebel Zintan brigade and members of the Mashashia tribe.

Mohammed al-Khabbasha, a military commander in Zintan, told AFP the tribesmen set up an authorised checkpoint in the area and arrested about 20 people, raising tension between the rival groups.

The Mashashia have however demanded the release of their own tribesmen, arrested by the Zintan brigade for fighting alongside Kadhafi forces during the armed uprising, said Khabbasha.

The Zintan fighters are credited with leading the units that captured Tripoli and have in recent weeks tried to disarm any forces viewed as loyal to the toppled Kadhafi regime, including the Mashashia.

“Yesterday (Sunday), the Mashashia fired on us with rockets. Today, we replied with Grad (rockets),” Al-Jilani Salem, a military official in Zintan, told AFP.

But Fraj al-Mashay, a member of the Mashashia tribe, blamed “provocations” by the Zintan for starting the clashes.

“This degenerated when they killed a man in front of his house. The people here are very upset and since there have been clashes. Yesterday, they fired on us with Grad rockets. At least four people were killed and a dozen injured,” he said.

The toll was not independently verified.

“It’s unfair. We only have light arms,” said Mashay.

Khabbasha said negotiations between the rival groups to diffuse the conflict are ongoing, with discussions taking place both Sunday and Monday.