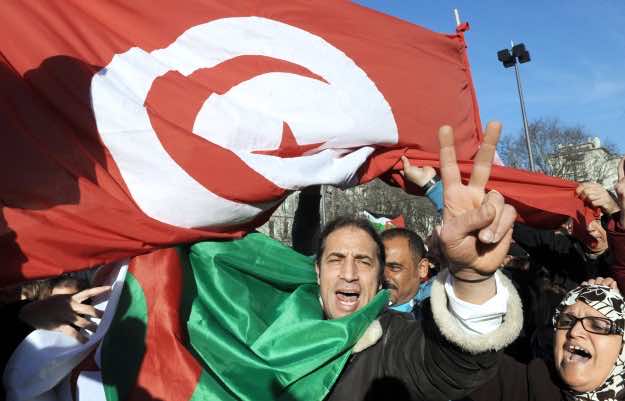 A roadside vendor’s altercation with a policewoman and his subsequent self-immolation in Tunisia started the Arab Spring that toppled veteran rulers in North Africa and the Middle East.

The Tunisian revolt started in this impoverished region on December 17 last year when Mohamed Bouazizi, 26, had a run-in with Fayda Hamdi, a 45-year-old policewoman who reportedly slapped him.

Two hours later he torched himself, sparking a revolution that has changed the face of the Arab world with dictators and despots toppled in Tunisia, Egypt and Libya.

Yemenis are turning a new page after their long-time autocratic leader signed a Gulf-brokered agreement under which he is to cede power by February.

Their Syrian counterparts might finally be seeing light at the end of the tunnel as the Arab and international communities boost efforts to end a bloody crackdown on dissent that has lasted nearly nine months.

A year on, memories of the pathbreaking incident still divide the Tunisian town in the centre-west.

Fayda Hamdi resumed work in October at the local municipality. Sitting in her windowless office, she told AFP that she “does nothing like everybody here”.

Accused of having “slapped” Bouazizi, she spent three and a half months in prison before being acquitted in April after the revolution.

“I was arrested on December 28. I served as the scapegoat, those in authority wanted to calm the anger of the people. But nothing calmed down and I was forgotten in the prison of Gafsa,” she said.

Her tired face hidden by a grey veil and with flashing black eyes, Hamdi carries two items in her purse — a copy of the acquittal and a photograph of her in uniform.

“I love my work and I was punished for only enforcing the law,” she said.

She avoids talking about Bouazizi saying she is “under shock” after his suicide.

Her boss, Mohamed Salah Missaoudi, intervenes angrily dismissing speculation that she had slapped the vendor as a “work of theatre”. Hamdi said she decided to resume work in Sidi Bouzid, despite other offers.

“If I had sought a change, people could say I had something to be reproached for.”

The Bouazizi family ended up by escaping from the town.

“Too many false things were said. They said Bouazizi’s mother made money, that she profited from her son’s death. They wanted to besmirch his reputation,” said the vendor’s friend Mohamed Amri.

Others say he never wanted to burn himself that he was drunk at the time.

He was a serious man who had one dream — to work, buy a car and build a house,” he added.

Youssef Jleli, a member of the “Festival of the December 17 Revolution” is cynical.

“Did Bouazizi really want to burn himself? Only psychiatrists can answer that. Did Fayda mark time in prison for nothing? Maybe. What interests us are the consequences of December 17.”

Since the past few days, Bouazizi’s photo adorns the wall of the prefecture building in front of which he burnt himself.

His mother dedicated the Sakharov Prize, which honours individuals or bodies who have dedicated their lives to the defence of human rights and freedom of thought and awarded posthumously to her son, to “the Tunisian people”.

His memory still lives on. In a nearby cafe, his friends remember him fondly.

“When he played, he slapped down the cards on the table and exclaimed ‘You will see, one day I will bring down the house!’ Today we laugh about that…” said one.