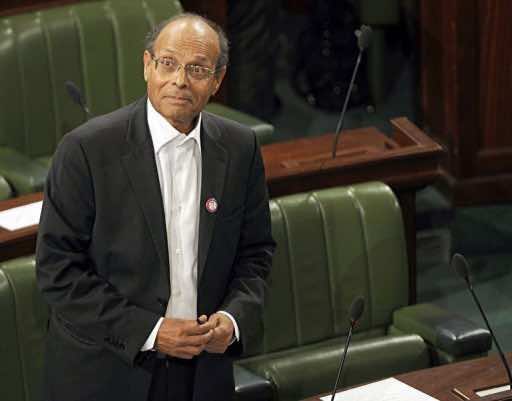 Rights activist and former opposition leader Moncef Marzouki will on Tuesday be sworn in as Tunisia’s first elected president since the north African country’s revolution sparked the Arab Spring.

“I am proud to carry the most precious of responsibilities, that of being the guarantor of the people, the state and the revolution,” said the 66-year-old Marzouki following his election Monday, wearing his trademark oversize glasses and his usual grey suit with white shirt and no tie.

Marzouki was elected with 153 votes in the 217-member constituent assembly, with three of the 202 deputies present voting against, two abstaining and 44 opposition members casting blank ballots.

The national anthem played in the assembly as supporters shouted “Loyalty to the Martyrs of the Revolution” after the vote was held.

Addressing the opposition, Marzouki said: “I have received your message that you will be keeping an eye on me.”

Among those who voted against Marzouki was Samir Bettaieb of the left-wing Democratic Modernist Pole.

“This election took place on the basis of an unbalanced text that gives a lot of power to a designated head of government at the expense of an elected president,” he told AFP.

Marzouki’s inauguration will take place at the presidential palace in Carthage, 11 months after the ouster of Zine el Abidine Ben Ali sparked the Arab Spring revolts that also saw long-time dictators toppled in Egypt and Libya.

“I have the great honour of becoming the first president of the first free republic of the Arab world,” the French-trained doctor told AFP.

The north African country’s new president was Ben Ali’s bete noire throughout his political career and was forced to live in exile in France for a decade.

Marzouki’s first order of business will be to name a prime minister, with Hamadi Jebali, the number two of the moderate Islamist Ennahda party, expected to get the nod.

Critics accuse Marzouki of being a pawn of Ennahda, which came in first in the October 23 constituent assembly elections with 89 seats.

Marzouki’s Congress for the Republic Party — whose symbol is a pair of red glasses inspired by his giant spectacles — was second, winning 29 seats.

His election came two days after the assembly adopted a provisional constitution allowing the country to name a government.

The vote — 141 in favour, 37 against and 39 abstentions — came after five days of often tumultuous debate which saw hundreds of people demonstrating outside the assembly building shouting slogans demanding freedom and dignity.

The election of a president and creation of a new government could take place only once lawmakers adopted the “mini-constitution”, laboriously drawn up over two weeks after the elections.
Marzouki, who headed the Tunisian League for the Defence of Human Rights (LTDH) from 1989 until Ben Ali supporters forced him out in 1994, has a deep-seated passion for human rights.

An admirer of India’s independence hero Mahatma Gandhi, he traveled to that country as well as South Africa after its transition from apartheid to democracy.

Marzouki, a father of three, is divorced from his French wife. A prolific writer, he has penned several books in French and Arabic including one title.

“Dictators on Watch: A Democratic Path for the Arab World.”

“It’s another positive step for Tunisia in its democratic transition,” State Department deputy spokesman Mark Toner told reporters. “And we stand ready to support them as they move forward.”