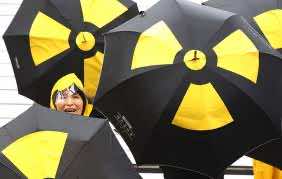 Swiss prosecutors said on Tuesday they had charged a father and his two sons for helping an unknown state build up an illegal nuclear weapons programme, after they admitted the crime.

Prosecutors launched a case against Marco and Urs Tinner in October 2004 and their father Friedrich the following year on suspicion of links with the network of Abdul Qadeer Khan, the “father of the Pakistani atom bomb”, who supplied Libya with nuclear weapons technology.

“Based on the admissions made by the Tinner brothers and their father and at their request, the Office of the Attorney-General (OAG) in November 2011 ruled that accelerated proceedings should be conducted,” said the prosecutors office.

“In the indictment, the accused and the OAG request that the court return verdicts of guilty in relation to offences under the War Material Act and against one of the sons for forgery of documents.”

Prosecutors said they would ask the Federal Criminal Court to accept a plea bargain covering sentences and costs in a shortened process.

“As a result of the admissions made by the suspects, no evidence will be heard in the main proceedings,” the statement said.

The brothers spent three-and-a-half years in pre-trial custody before being released in December 2008 and January 2009. Their father had been earlier released in 2006, according to prosecutors.

Marco and Urs lodged a claim with the European Court of Human Rights over the lengthy period behind bars but the Strasbourg court ruled in April that their rights had not been violated.

The men were suspected of helping Tripoli develop centrifuges to enrich uranium from 2001 to 2003 and collaborating with Khan, but in Tuesday’s statement, Swiss prosecutors did not name Libya in its charges but referred only to an “unknown state.”

Newspaper reports claimed the family were later recruited by the CIA to help halt Libya from gaining nuclear capability.

In 2007 the Swiss government ordered that material seized in the course of the investigation be destroyed to stop nuclear weapons plans falling into hostile hands.

The prosecutor’s office did not release specific details of the charges filed.

Libya agreed to abandon its nuclear weapons plans in 2003 under pressure from the West.