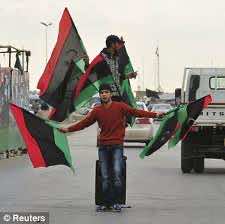 About 100 people on Tuesday protested against Libya’s new rulers for a second day in Benghazi despite assurances the former rebel stronghold will be the country’s new economic capital.

The National Transitional Council has come under fire from disgruntled protesters for the first time in Benghazi, cradle of the uprising that toppled and killed Moamer Kadhafi.

NTC chief Mustafa Abdel Jalil was singled out by the protesters on Monday for a lack of transparency and his willingness to forgive fighters of the slain dictator.

“People want salaries and a decent living. You go to banks and there is no money. What is this government doing?” asked Mohammed Shibani, a 43-year-old resident protesting at Benghazi’s Shajara Square on Tuesday.

“There is no control. Look at the prices. They are only rising.”

An AFP correspondent at the square — where the first anti-Kadhafi rally was held on February 15 — said several protesters had spent the night there since the demonstration started Monday.

Faced with angry calls the NTC late Monday announced that Benghaziwould be the future “economic capital” of the North African country.

“Benghaziwill be the economic capital of Libya,” NTC member Abdelrazzak al-Aradi said, adding ministries related to the economy would be located in the eastern city.

Asked by AFP if the decision was taken after protests against the NTC and Abdel Jalil, he said: “Yes. Since the revolution the people of Benghazi feel they are marginialised and forgotten.”

Abdel Jalil himself called upon Libyans to be patient on Monday.

“I want to reassure Libyans that a lot will be done. Be patient,” he said, promising more transparency.

“The NTC will start its own website on which the list of its members and the activities of the NTC will be made public.”

Calling for “restraint and preservation of public property”, Abdel Jalil said the NTC was investing in priorities including the integration of former rebels into society.

Abdel Jalil also said a budget would be allocated to each city and regional council, depending on its population and the extent of damage caused in the eight-month conflict.

On Saturday Abdel Jalil had said that the new Libyan rulers can “forgive and tolerate” Kadhafi fighters, a remark which has angered Benghazi protesters.

On Tuesday protesters continued to express their anger.

“We have specific demands. We want to know what NTC is doing. We think nobody is doing anything,” said Suleiman Masba.