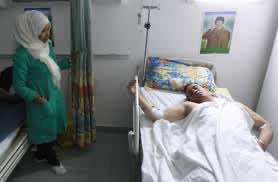 Greece on Tuesday said it would continue to offer medical assistance to Libyans wounded in the eight-month insurrection that toppled the regime of Moamer Kadhafi in October.

“Libyan citizens wounded or mistreated during the conflict will continue to benefit from entry facilitation and care in our country,” the ministries of foreign affairs and police said in a joint statement.

“Greece will maintain and increase the support offered to Libya and its people,” the ministries said.

Over 2,000 Libyans have been treated in Greek hospitals since the start of the conflict in February and hundreds are still receiving care, a ministry source said.

The ministries said future requests for medical airlift to Greece should be channel led through the Libyan wounded evacuation team (WLET) and the Temporary financing mechanism (TFM), the relevant authorities authorised by Libya’s National Transitional Council.

All applicants should also hold consular approval papers, they added.

The Libyan embassy in Athenswill also be asked to keep track of Libyan nationals during their stay and advise Greek authorities when they return home, the ministries said.