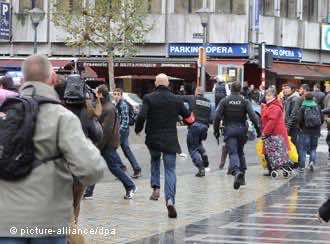 A grenade attack on a crowded square in the Belgian city of Liege has killed four people and wounded many dozens. The assailant is among the dead. Belgian authorities have ruled out a terrorist attack.

Four people died and at least 75 were injured in a lunch-hour grenade attack in the eastern Belgian city of Liege on Tuesday.

Belgian public prosecutor Daniele Reynders said the gunman was among the four dead, along with two teenagers and a 65-year-old woman who died later in hospital. According to La Libre newspaper, one of the wounded is a 2-year-old girl who remains in critical condition.

The man armed with hand grenades and guns opened fire around the central Saint-Lambert square, which was packed with Christmas shoppers.

Reynders said in a press conference it was not a terrorist incident.

The prosecutor identified the attacker as Nordine Amrani. The 33-year-old was convicted in 2008 for the illegal possession of firearms and running a cannabis plantation as part of a criminal gang.

Earlier media reports had said several attackers opened fire on the square, throwing stun grenades into the courthouse facing the square at a bus shelter.

Police told residents to remain in their homes or seek shelter in shops or public buildings. Buses were asked to leave the city center and all shops in the area were closed, some with many customers stranded inside.