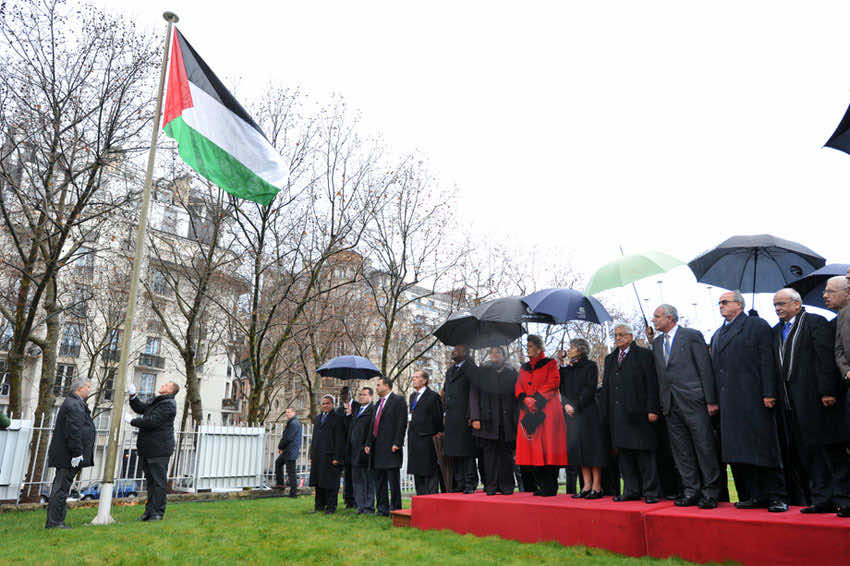 The Palestinian flag was raised for the first time at the Paris headquarters of the United Nations Educational, Scientific and Cultural Organization (UNESCO) today as the UN agency marked Palestine’s admissionas a full member.Senior UNESCO officials and Palestinian Authority President Mahmoud Abbas attended the ceremony, which follows the decision of the agency’s General Conference on 31 October to admit Palestine as UNESCO 195th member.Membership took effect on 23 November after Palestine signed and accepted the agency’s constitution in London. UNESCO thus became the first UN agency to admit Palestine as a full member.In remarks welcoming Palestine to the agency, UNESCO Director-General Irina Bokova noted that membership “goes beyond raising the flag” and includes critical rights and responsibilities, as well as the sharing of universal values such as tolerance and respect for others.“Membership allows a country to bring to the world that which it cherishes most – the wealth of its culture, the resonance of its dreams for mutual understanding,” she said.

“The Palestinian people, as all peoples, must be able to preserve their culture and heritage. They must benefit from quality education, education for peace. A strong educational system teaches respect for human rights. A vibrant culture respects the culture of others. In this connected world, healthy societies flourish through ties with others. UNESCO stands for all of this.”

Ms. Bokova stressed that “multilateralism has never been so important. This must be a chance for all to join together around shared values and renewed ambitions for peace.”

In his address to assembled delegations and guests, Mr. Abbas said the admission to UNESCO was “a tremendous source of pride to us… Palestinian writers, artists and researchers have played a vital role trying to preserve the culture and identity of our people. UNESCO has also played a fundamental role – and has been a loyal partner.”

Today’s ceremony was also attended by Katalin Bogyay, the President of UNESCO’s General Conference, and Alissandra Cummins, the Chairperson of the agency’s Executive Board.