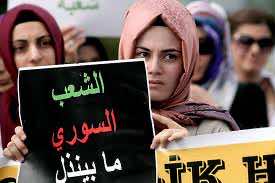 The U.S. State Department on Tuesday urged Russia to back United Nations action on Syria following worrying statements by U.N. officials saying the death toll in the months-long Syrian protests had exceeded 5,000.

“We are again calling on our partners on the Security Council to be willing to take action and speak out for the innocents in Syria… including Russia,” the department’s spokeswoman Victoria Nuland told reporters, according to AFP.

“And we are again calling on our partners on the Security Council to be willing to take action and speak out for the innocents in Syria who are suffering at the hands of the regime, including Russia,” Nuland said.

But earlier on Tuesday, Russia said it rejected “immoral” Western criticism of its conduct in the U.N. Security Council.

Deputy Foreign Minister Gennady Gatilov said Russia was not ready to refer Syria to the International Criminal Court after the U.N. human rights chief issued a fresh call for the council to refer the situation to the court.

“We proceed from the position that only the U.N. Security Council can sanction the transfer of the Syrian dossier to the International Criminal Court,” the state-run news agency Itar-Tass quoted Gatilov as saying.

“We do not see grounds for this at the present time,” he added.

Gatilov said Russia shared other council nations’ concerns about the continuing violence but “we do not agree with evaluations according to which responsibility for the violence … lies exclusively upon the Syrian authorities.”

Russia used a similar argument in October, when it joined China in using their veto power as permanent Security Council members to block passage of a Western-drafted resolution that would have condemned Syria’s government for its crackdown.

Security Council nations including the United States and France have expressed frustration with opposition to sanctions and other pressure on Syria from Russia and China.

French U.N. Ambassador Gerard Araud said on Monday that it was “scandalous that the council, because of opposition from some members and the indifference of others … has not been able to act to exert pressure on the Syrian authorities.”

Russian Foreign Minister Sergei Lavrov hit back, saying that Western nations should also put pressure on militants he said shared the blame for the violence.

“If those who refuse to exert pressure on the armed extremist part of the opposition are at the same time accusing us of blocking the work of the Security Council, I would call that position, in the final analysis, immoral,” he said.