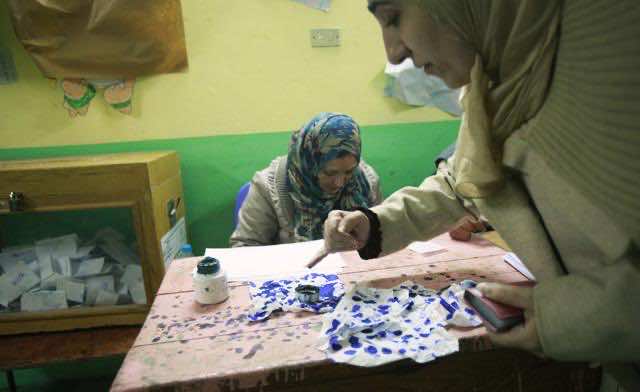 The second round of Egypt’s first post-Mubarak parliamentary polls is taking place on Wednesday and Thursday amid expectations of an unprecedentedly high voter turnout.

Some 18.8 million Egyptians are eligible to cast their ballots in this round of the first legislative polls since a popular uprising ended Hosni Mubarak’s 30-year-rule in February.

Remnants of Mubarak’s now-defunct National Democratic Party (NDP) are expected to constitute the primary counterweight to Islamist parties in the second round.

In line with the Constitutional Declaration issued in March, 4,589 polling stations will be put under the direct supervision of almost 10,000 judges, according to Egyt’s al-Ahram daily.

Some 355,000 Egyptians living abroad have also registered to vote in the second round, with most living in Arab Gulf countries, according to the IDSC.

Islamists who swept to victory in the first stage of the country’s parliamentary elections were looking to consolidate their winning streak in the second round of voting.

The election’s first stage on Nov. 28 saw Islamist parties crush their liberal rivals, mirroring a pattern established in Tunisia and Morocco following a string of popular uprisings across the region.

Parties affiliated with the Muslim Brotherhood and the ultra-conservative Salafi movements won 65 percent of all votes, trouncing liberal parties who managed 29.3 percent, according to AFP.

The Muslim Brotherhood’s Freedom and Justice Party (FJP) said it won 32 out of 56 individual seats contested in the first phase of the multi-stage parliamentary polls, with four seats going to party allies.

In a separate party vote, which will see more than 100 seats distributed, the FJP won 36.6 percent while the hardline Islamic fundamentalist party al-Nour came second with 24.4 percent.

The Muslim Brotherhood had been widely forecast to triumph as the country’s most organized political group, well known after decades of charitable work and its endurance through repeated crackdowns by the Mubarak regime.

But the good showing from Salafist groups was a surprise, raising fears of a more conservative and overtly religious 498-member new parliament.

The Muslim Brotherhood has been at pains to stress its commitment to multi-party democracy, inclusiveness and civil liberties, while also advocating the application of sharia law.

Nevertheless, the prospect of an Islamist-dominated parliament raises fears among liberals about religious freedom in a country with the Middle East’s largest Christian minority.

Much remains unclear about how the new parliament will function and whether it will be able to resolve a stand-off with the armed forces over how much power they will retain under a new constitution to be written next year.

After the voting for the lower house of parliament, which will end in January, Egyptians will then elect an upper house in a further three rounds of polls.

The largest number of FJP candidates are concentrated in rural governorates of the Nile Delta, including Beheira (30 candidates) and Sharqiya and Menoufiya (56 candidates together). While Beheira and Sharqiya are both considered historical Brotherhood strongholds, FJP candidates there are nevertheless expected to face stiff competition from holdovers of Mubarak’s now-defunct NDP.

In the Menoufiya Governorate, for example, in which the families of Mubarak and his predecessor, late president Anwar Sadat, boast a significant presence, FJP candidates are expected to face an uphill battle, according to a report carried by al-Ahram on Wednesday.

In the Upper Egyptian governorate of Sohag, meanwhile, tribal and family affiliations are expected to work against the FJP. Sohag, notably, is home to a large number of former NDP members.

The same can be said of the Upper Egyptian governorates of Aswan and Beni Sueif, where the dismantled NDP remains a force to be reckoned with.

Voting will take place over two days and a run-off being held a week later.
Run-off elections are slated for Dec. 21 and 22.