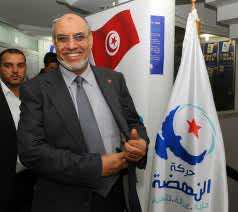 Tunisia’s Hamadi Jebali, the number two in the moderate Islamist Ennahda party that won October elections, on Wednesday was tasked with forming the country’s new government, the presidency said.

“The president of the Tunisian Republic Moncef Marzouki has decided to charge Hamadi Jebali with forming the government,” the president’s office said in a statement a day after Marzouki was official sworn in.

The 62-year-old Jebali, who spent 15 years behind bars under the regime of Zine el Abidine Ben Ali, was widely expected to get the nod to head the government and is expected to announce the new cabinet in several days.

Most ministerial posts are expected to go to Ennahda, according to political sources, while its allies from the centre-left Congress for the Republic party and some independents are also expected to take several portfolios.

Ennahda won 89 seats in the 217-member constituent assembly, with Marzouki’s Congress for the Republic Party coming second with 29 seats.

The mass protests that erupted in Tunisian early a year ago and ousted Ben Ali sparked popular revolts across the Arab world, toppling longtime dictators in Libya and Egypt.