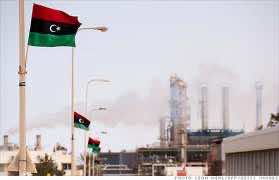 Libya hopes to raise its oil capacity to up to 2.2 million barrels per day in coming years, its oil minister said on Wednesday, even as the country tries to return to pre-conflict output levels.

At a meeting of the Organization of Petroleum Exporting Countries (OPEC) in Vienna, Libya’s oil minister Abdel Rahman bin Yezza said the country planned to increase its capacity to “probably 2.0, 2.2 million (barrels per day) in 3-5 years.”

In 2010, Libya’s capacity was 1.67 million barrels per day (bpd), according to the International Energy Agency.

Bin Yezza also confirmed that Libya would be back to full pre-crisis production levels by “about the second half of next year.”

In November, the chief of Libya’s National Oil Corporation Nuri Berouin had said Tripoli expected to reach pre-crisis levels of about 1.7 million barrels per day (bpd) by the end of 2012.

Libyan oil production all but halted following unrest in the North African country but it has since resumed to 600,000 bpd and was predicted to attain 800,000 bpd by the end of this year.

During and after the uprising against Moamer Kadhafi, Saudi Arabia and Kuwait decided to pump more crude to compensate for the Libyan shortfall but bin Yezza was optimistic on Wednesday that the Gulf states would now pull back.

“I am sure they will accommodate us,” he told journalists.

Ministers of the 12-member OPEC cartel were meeting in Vienna Wednesday to decide on whether to change oil production levels in the face of over supply, weak demand and high crude prices.