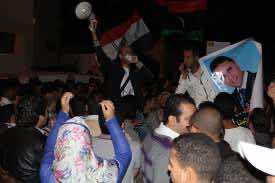 An Egyptian military court sentenced a blogger who criticised the army to two years in prison on Wednesday after he went on a hunger strike to protest an initial three-year sentence.

“In the name of the people, Michael Nabil has been sentenced and punished with two years in prison and fined 200 pounds ($33),” the court said after a retrial.

Nabil, who had criticised the ruling military on his blog and called on people to avoid the draft, had been sentenced to three years in April in a widely criticised trial.

He has been on hunger strike since August. His brother Mark told AFP that Nabil “will escalate his hunger strike. He was drinking juice and milk, but now will only drink water.”

Heba Morayef, a researcher for Human Rights Watch, said the new sentence was a disappointment, although Nabil was likely to spend a year in prison because of the time he served.

“There are times when the military has used these trials as a face-saving measure to release someone improperly detained,” said Morayef, who is based in Cairo.

“The military was offering another option, that they would release him in return for an apology,” she said. “But because of his principle — he didn’t recognise the legitimacy of military trials — it has turned into a battle of wills.”

The military took charge after an uprising forced President Hosni Mubarak to resign in February.

It has faced criticism for sentencing thousands of civilians in military courts for offences ranging from assault and rape to insulting the ruling generals.

In September, the military denied Nabil was a “prisoner of conscience.”

“What Nabil wrote on his blog is unrelated to opinion; it was a clear transgression of all boundaries of insult and libel, and manufactured lies against the armed forces,” the official MENA news agency quoted a military official as saying.

Nabil’s sentencing is likely to cast doubt on the military’s insistence that it does not target people because of their political beliefs.

Nabil’s views are unpopular in Egypt: he is a supporter of Israel, and has said that he would not serve in the military because he is a pacifist.

But he has become a cause celebre among anti-military and rights activists for his dogged refusal to apologise to the military, even after his hunger strike reportedly took a heavy toll on his health.

Last month, the military jailed another blogger and activist, Alaa Abdel Fattah, on charges of inciting deadly clashes between soldiers and Christians in October.

Fattah’s imprisonment sparked international condemnation, leading the military to refer his case to a civilian prosecutor this month.