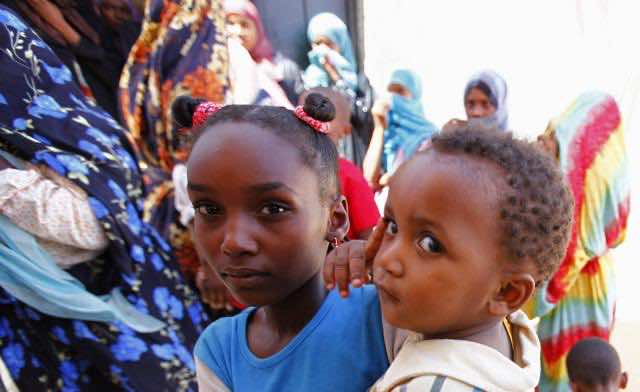 Libyans from the town of Tawarga called upon the world powers on Wednesday to help them, saying ex-rebels who were backed by NATO in fighting Moamer Kadhafi’s rule were stopping them from returning home.

The people from Tawarga — who are mostly black-skinned Libyans now living in refugee camps — also accused the former rebels from Misrata, Libya’s third largest city, of planning to grab their land and homes.

“Those who expelled us from our homes were armed by NATO in fighting against Kadhafi. It is now a global responsibility of these powers to help us return to our homes,” said Jabal Mohammed, a doctor from the town of 40,000 inhabitants located between Misrata and Kadhafi’s hometown of Sirte.

The people of Tawarga stand accused by Misrata fighters of having played a key role in the siege by Kadhafi’s forces of the port and of raping their women during some of the bloodiest months of the revolution.

On Wednesday, the Tawargans defended themselves in front of representatives of the United Nations and other rights groups at a meeting in a refugee camp in Tripoli where nearly 2,000 Tawargans have been staying for months.

“What happened between Misrata and Tawarga was the result of Kadhafi’s strategy of making people hate each other, a strategy that made people kill each other,” said Mohammed, one of the organisers of the meeting.

“We confess that some people from Tawarga took part in attacking Misrata, but this was because they (Kadhafi’s troops) told us many foreigners from Egypt, Morocco, Yemen, Afghanistan were in Misrata. People from Tawarga believed this and took up arms to fight these outsiders.”

Fearing the wrath of Misratans, the people of Tawarga fled their town after the siege by Kadhafi’s forces of the port city was broken, he added.

The feud between Tawarga and Misrata — whose men played a key role in overrunning Tripoli and also captured Kadhafi alive on October 20 — is now a classic example of the challenges facing Libya’s new rulers as they undertake national reconciliation.

“Now we are scattered. Our children, women and elderly people are suffering. Our neighbours (Misratans) are saying we can’t return to Tawarga. We need help. We need protection,” Mohammed said.

The displaced Tawargans are staying in refugee camps across Libya, in and around cities such as Tripoli, Benghazi, Hun and Sabha.

Another Tawargan, Ali Jibril, said the bitterness triggered by the Misrata battle was not the only reason why Misratans were stopping Tawargans from going home.

“The real story is that Misrata wants our territory,” Jibril told AFP.

Several Tawargans AFP spoke to at the Tripoli refugee camp echoed Jibril’s view, saying the vast swathe of land belonging to their town was now emerging as the cause of the feud between the two groups.

“Tawarga stretches between Sirte and Misrata. And we are only 40,000 people, while Misrata has a population of more than 400,000 with much less land than us,” said another Tawargan.

“They envy us. Their accusations that we fought them or our boys raped their women is just propaganda. Their hidden agenda is that they want our homes. They want our land,” he said on condition of anonymity.

Officials from the United Nations and other rights groups told AFP that the situation was still sensitive and the time was “not right” for Tawargans to return home.

“Libya is still coming out of a civilian conflict. And in such a conflict there are lot of misunderstandings between populations,” Laurent Grosbois, senior protection officer at the United Nations High Commissioner for Refugees said.

“Certain security procedures have to be in place before these people return to their homes. And we are not mandated to provide physical protection to them. We have no peacekeeping forces here.”

Grosbois said his office was monitoring the Tawargans’ situation.

“But it is difficult to monitor. They are a large number of displaced people,” he said.