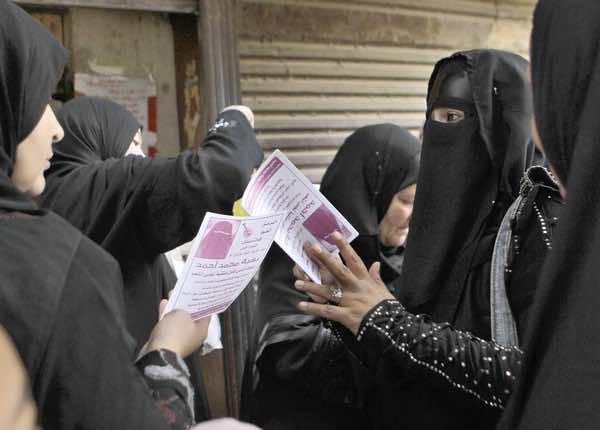 Older residents remember when militants imposed Islamic law in the tough Cairo neighborhood of Imbaba two decades ago, and how Hosni Mubarak crushed them.

Now, 10 months after Mubarak’s overthrow, Imbaba is ready to vote the Islamists into power.
Islamist influence could be felt in Imbaba’s dusty alley ways, where police have feared to go since the uprising that overthrew Mubarak in February, as voters queued on Wednesday to cast their ballots.

A song praising Islamists blared from a bakery outside a school used as a polling station, as a minibus covered with posters for the ultraconservative Salafist party Al-Nur passed by.

“Ride with us,” said a slogan under the picture of a long-bearded candidate.

The sprawling working-class neighbourhood is packed with street cafes where youth, many of them jobless, idle away their days.

The high unemployment rate, poverty and a sense of disenfranchisement have made Imbaba a fertile ground for the Muslim Brotherhood, Egypt’s most influential Islamist movement, and new Salafist parties.

“I left my house today without enough money to buy bread,” said Mohammed Rashad, an unemployed 41-year-old decorator, who said he voted for Al-Nur.

“That’s why people are flocking to Al-Nur, because they have been helping us with services, even before they formed a party,” he said.

Al-Nur was given its party licence in June, but the Salafis who formed it had widened social services in neighborhoods like Imbaba in the months after Mubarak’s overthrow, rivalling the Muslim Brotherhood’s programs.

The Brotherhood was banned under Mubarak, but allowed to run candidates in parliamentary elections by registering them as independents.

“Our media is scaring people of the Islamists,” Rashad said.

Fawzi, a 57-year-old who also said he was voting for Al-Nur, insisted that there was nothing to fear from the Islamists.

Fawzi recalled when Islamists tried to impose their law on the neighborhood in the early 1990s.

“They banned alcohol, they would go to weddings and ban naked dancers” (partially clad belly dancers) “but they never beat anyone.”

That period, ended by a all-out police campaign to round up the neighbourhood’s Islamists, also saw attacks on Imbaba’s minority Christians.

Fears of the Salafis are still particularly resonant among Imbaba’s Christians. In May, Salafis were accused of inciting attacks on two churches that left 15 people dead in ensuing clashes.

Al-Nur’s success in the first round of the election in late November surprised even the inexperienced party leaders, after they took a large chunk of the vote that probably would have gone to the veteran Brotherhood.

Al-Nur won 24 percent of votes for its party list, but lost most seats to the Brotherhood’s Freedom and Justice Party in a direct vote for individual candidates in the complex electoral system.

The run-off losses were seen as a backlash against the party after some of its candidates made widely reported comments in support of an uncompromising application of Islamic law.

But in Imbaba, which is part of an electoral district that also includes two middle-class neighbourhoods, the Salafis appeared to enjoy enough support to rival the FJP, which won 36 percent of the party list vote in the first round.

“The Brotherhood had politicians in parliament, and no one benefited,” said Rashad. “Al-Nur is new, and God willing we will benefit from them.”

One voter, a butcher who gave his name as Ahmed, came to the polling station carrying his membership card for the liberal Wafd party, the country’s oldest party. But he said he was voting for the Salafis.

“I have seen nothing from the Wafd. I’m voting for Al-Nur. The people know their candidates.”
Hisham Abdel Moneim, a Muslim preacher who had volunteered to help secure the station, said disillusioned voters were placing their faith in the Islamist parties.

“People are tired of corruption, and they don’t trust the other trends.