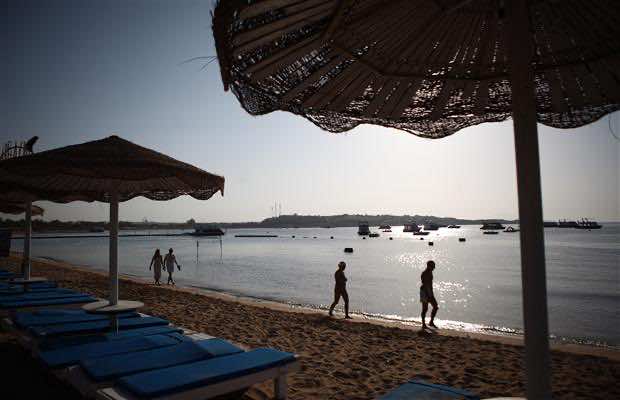 At the foot of the ancient Pyramids, tour guides and vendors are divided over the affects an Islamist-dominated parliament might have on the lucrative tourist industry.

Egyptians are voting Wednesday in the second-phase of three-round parliamentary elections — the first since president Hosni Mubarak was ousted in February — that Islamic parties are expected to win hands down.

Much of the buzz has been sparked by calls from the ultra-conservative Salafists, standing under the banner of the Al-Nur party, for tourism that is “halal,” a reference to that which is allowed in Islam.

Alcohol, bikinis and mixed bathing would be banned.

“A five-star hotel with no alcohol, a beach for women — sisters — separated from men in a bay where the two sides can enjoy a vacation for a week without sins,” influential cleric Yasser Burhami was quoted by The Arabist website as recommending on Sunday.

“The tourist doesn’t have to swim with a bikini and harm our youth.”

Speaking on Saturday, Al-Nur party spokesman Nader Bakkar told the Egyptian satellite channel CBC on Saturday “we do not want to ban tourism. On the contrary, we want revenue from tourism to multiply.”

Imed, a 30-year-old who offers camel rides outside the pyramids, is far from the beaches, where alcohol and bikinis are still permitted, but is already suffering from a plunge in tourism that followed Mubarak’s ouster.

Desperately waiting for the tourists to return, he is adamant that an Islamist victory at the polls would doom an industry that accounts for around 10 percent of GDP.

“This Islamists would make us lose our livelihoods,” said Imed, dressed in a black, traditional Egyptian galabiyah and speaking from behind sunglasses.

“That’s why we’re going to vote for the Egyptian Bloc and Wafd (two secular and liberal groups) because it’s tourism that feeds us.”

Nearby, Ibrahim Harbi Mohammed listens to the chanting of verses from the Koran, the Muslim holy book, in his dark and dusty shop, empty of tourists.

He says a distinction needs to be made between the Salafists and Al-Nur, which was formed only six months ago, and the 80-year-old Muslim Brotherhood and its Freedom and Justice party.

“The real problem is the Salafists; they are too radical,” Mohammed says.”They weren’t seen for 30 years and then, all of a sudden they appear and want to ban tourism?”

Just down the street, in the square that leads to the pyramids, huge banners are flying, and those of Al-Nur are the most imposing.

On Friday, around 1,000 people working in the tourism sector demonstrated against “halal tourism.”

But while the debate over halal tourism continues, other issues are raised.

Tahan, 39, sells jewelry and speaks of Egypt’s history and beauty, “which we want to share with tourists” but is concerned about security. She says she will vote for the FJP because it will make the streets safe again.

Mohammed, speaking in his shop next door, echoes that.

“Because of the insecurity, tourists are always escorted. They march from the buses to the pyramids and don’t take the time to have a look at the shops along the way.

But, as he speaks, a few small groups of tourists are having a look at plastic pyramids and keffiyehs (head scarves) labeled “Made in China.