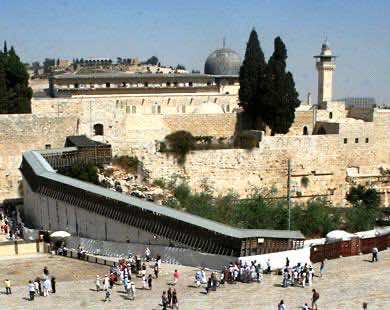 Morocco has expressed strong condemnation of the closure, last Monday, of the ramp that leads to Bab Al Maghariba and to the Wailing Wall.

“The Kingdom of Morocco, whose Sovereign HM King Mohammed VI chairs the Al-Quds Committee, expresses its strong condemnation of this new unilateral act aimed at altering the authentic character of Al Quds al-Sharif and hurting all Muslims’ feelings,” a foreign-ministry statement said on Wednesday.

The statement added that Morocco cannot accept that a decision -that is reprehensible from all standpoints-, and left to the Jerusalem municipality under the pretext of security, be dealt with heedlessly by the Israeli government.

It said the decision violates international legality and the UN resolutions prohibiting any change of status in the occupied Palestinian territories, including Al Quds Al-Sharif.

The Kingdom of Morocco, which remains attached to the values of peace, dialogue and moderation, held intensive discussions on this matter over the past days to insist on the need to put an end to the fait accompli logic and relaunch the negotiating process, the statement said.