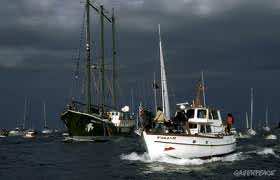 After the European Parliament’s decision to reject the extension of the EU-Morocco fisheries agreement, Spanish government and European fisheries professionals on Thursday called on the EU to assume its responsibilities by unfreezing aid, insisting on signing a new accord with Morocco.

The European Parliament rejected on Wednesday the extension of the annual protocol of fisheries agreement between Morocco and the EU, which entered into force provisionally on February 28, 2011. Some 326 MEPs voted against the extension, 296 in favour and 58 abstained.

“Spain demands a compensation for the damages that the Spanish fishing fleet will suffer from,” said Fishing Minister Rosa Aguilar, on the sidelines of a meeting in Brussels with his European peers.

Aguilar also said his country will defend its fleet and fishermen who will be jobless, adding that Madrid will also stand for renegotiation of an agreement with Morocco.

The Spanish government reacted immediately on Wednesday to the EP’s resolution, saying it disapproves the vote and reiterates support and commitment to Spanish fleet operating in the waters off Morocco.

The PE’s decision also infuriated Spanish shipowners, notably those affiliated to the Spanish Fishing Federation (CEPESCA) and to the Andalusia’s Federation for Fishing Associations (FAAPE) which firmly denounced this resolution that undermines the interests of the fishing sector in Spain.

European Fisheries professional, for their part, on Thursday called on “the European Commission to assume its responsibilities” and sign a new accord with Morocco, said president of the European Shipowners Organization (EUROPESCA), Javier Garat.

Reacting to Morocco’s call for the European boats to leave its waters on Wednesday midnight, Javier Garat said that this reaction is “logical” after the EP’s faux pas.