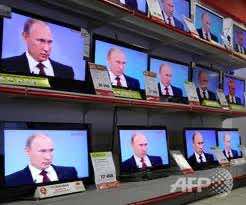 Russian Prime Minister Vladimir Putin on Thursday accused the US special forces of being involved in the killing of deposed Libyan dictator Moamer Kadhafi.

“Who did this?” Putin said in his annual televised phone-in with Russians.

“Drones, including American ones. They attacked his column. Then using the radio — through the special forces, who should not have been there — they brought in the so-called opposition and fighters, and killed him without court or investigation.”

Russia had initially allowed NATO’s air campaign in Libya to go ahead by abstaining in a UN Security Council vote. But it then vehemently criticized the campaign which Putin at one stage compared to a “crusade”.

His comments mark the first time that Russia has implicated the US administration in Kadhafi death.

Putin also lashed out at US Senator John McCain, a former presidential candidate and frequent Putin critic who warned in a message on Twitter this month that an “Arab Spring” may soon be coming to Russia.

“I know Mr McCain,” said Putin, adding that he would prefer not to refer to him as a “friend”.

“They still fear our nuclear capabilities,” he said in reference to the West.

“That is why we are such an irritant. We have our own opinion and are conducting our own independent foreign policy … And it clearly bothers someone.”