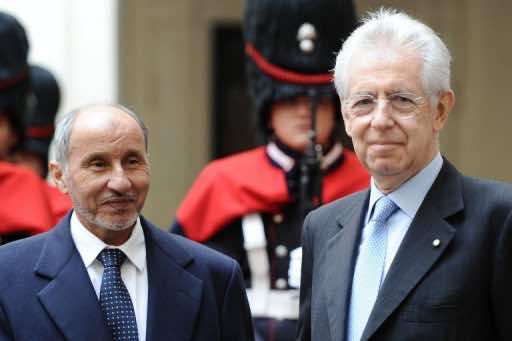 Italy and Libya are ready to “reactivate” their treaty of friendship, Prime Minister Mario Monti said Thursday after a meeting with the head of Libya’s National Transitional Council, Mustafa Abdel Jalil.

Abdel Jalil was in Rometo discuss the 2008 treaty of friendship between Libya and its former colonial power Italy, which was signed by the late dictator Moamer Kadhafi and former premier Silvio Berlusconi.

“We have decided to reactivate the friendship treaty, which had been suspended, and we have re-examined concrete ways of concentrating on the priorities of the new Libya,” said Monti, who took over from Berlusconi when the latter was ousted in November.

The treaty saw Italian companies granted billions of euros in contracts in exchange for $5 billion in compensation for colonial rule, to be paid over 25 years.

It also included construction of around 1,700 kilometres(1,050 miles) of motorway coastline in Libya at a cost of $3 billion, and allowed Italy to send back immigrants reaching its shores from Libya.

“Italy has already unblocked 600 million euros” ($779 million), he said, adding that a part of that sum could be used to reimburse Libyan debt owed to Italian businesses.

Abdel Jalil said reactivating the treaty was “in the interest of both countries,” and added that he hoped Libyans who wanted to come to Italy for medical treatment or to study would be welcomed.

The NTC head, who was set to meet President Giorgio Napolitano later on Thursday, said that the resources to pay for such treatment or education had already been set aside in Libya, and would not come out of the unfrozen funds.

The Italian prime minister said he would travel to Tripoliin the near future to continue to strengthen the relationship between the two countries.

Under the friendship treaty, more than 180 Italian businesses had taken advantage of the favourable terms for trade links, including Finmeccanica, Impreglio and ENI, which became the biggest foreign energy producer in Libya.