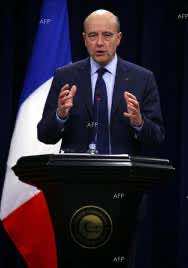 French Foreign Minister Alain Juppe issued a new call for Syrian President Bashar al-Assad to quit on Thursday, accusing his regime of committing crimes against humanity on a daily basis.

“How many more victims does the world still need before it understands that Bashar al-Assad must go?

“For nine months, the Syrian people shouted with courage for freedom.

“For nine months, Bashar al-Assad has remained deaf to these legitimate demands, has refused reforms and has detained peaceful demonstrators for torture, killings and barbarism in response,” Juppe said.

His remarks came shortly after Human Rights Watch said in a report that Syrian military commanders ordered troops to indiscriminately shoot at unarmed protests and squash demonstrations “by all means necessary.”

“Faced with this wild and murderous rampage, the international community must not remain silent,” he added.