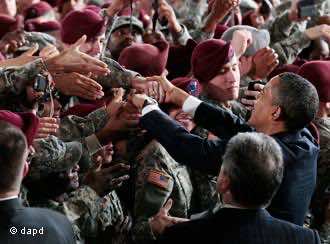 President Barack Obama has hailed the achievements of US troops in Iraq, announcing the end of nearly nine years of war. But it is unclear how the US will help contain the conflicts likely to continue in the country.

Obama welcomed home US troops in Fort Bragg on Wednesday, honoring America’s nearly nine years of “bleeding and building” in Iraq and hailing the “extraordinary achievement” of a war he once described as “dumb.”

“One of the most extraordinary chapters in the history of the American military will come to an end. Iraq’s future will be in the hands of its people. America’s war in Iraq will be over,” he told the cheering troops.

This comes after a meeting on Monday with Iraqi Prime Minister Nouri al-Maliki in Washington to discuss post-war US-Iraqi relations. American forces in Iraq, once 300,000 strong, now number only around 6,000, and those troops will be returning home by the end of the year.

Obama said that the US would pursue a long-term and close relationship with a sovereign Iraq.

“The Iraqi people must know you will not stand alone,” Obama said at the joint press conference. “You have a strong and enduring partner in the United States.”

The Iraq War cost some 4,500 US troops, and hundreds of thousands of Iraqi combatants and civilians, their lives. But al-Maliki said the end result had been positive.

“Even if some people say something different, the withdrawal of US troops is a success,” al-Maliki told reporters.

But while “war,” however one may choose to define that term, may be officially over, few are under the illusion that Iraq will be a completely peaceful place. The Iraqi government is going to have to rely on US help to maintain security for years to come, and the questions are: what form will that help take, and will it be effective?

Uncertainty in the air

The Deputy Commanding General for US Operations in Iraq Frank G. Helmick says US troops can now pull out because they have successfully established an Iraqi military, whose forces now total some 700,000.

But he admits risks still do exist. There are holes in security, Helmick said at a recent press conference. “Their air sovereignty, for instance, their air-defense capability, the ability to protect two oil platforms and then the ability to do combined armed operations for an external defense.”

Security experts agree with that assessment.

Nora Bensahel, a specialist with the Center for a New American Security institute in Washington told Deutsche Welle that it would take at least a decade for the Iraqi air force to be able to secure the skies above the country.

So one of America’s main tasks will be to ensure the integrity of Iraq’s borders and air space. Significantly, it was announced on the periphery of the Obama-Maliki meeting that Iraq would be purchasing 18 more American-made F-16 warplanes to bolster its air defenses.

“There’s going to probably be quite an important trade relationship between the two countries well into the future,” Ali al-Saffar, an Iraq analyst with the Economist Intelligence Unit in London told AFP news agency. “That’s primarily, in the short tem anyway, going to be based around two things…oil services contracts and arms deals.”

At stake is whether Iraq will become a pole of stability in the Middle East or a site of further turmoil.

“A lot of this really comes down to: what kind of a role is Iraq going to play in regional security?” Jon Alterman, director of the Middle East program at the Center for Strategic and International Studies, told the AP news agency. “Is it going to be a place where bad people come and go, or is it going to play a role in calming down a region that needs some calming down?”

But security concerns focus not just around possible external threats, but internal tensions as well. One of the primary sources of friction is the relationship between Shiites, who make up over 60 percent of Iraq’s population, and Sunnis, who enjoyed predominance under former dictator Saddam Hussein and his Baath Party.

“The American departure represents a joyous event, but our concerns are about the time after the departure,” Jassim Mohammed, a schoolteacher in the Iraqi city of Tikrit near Hussein’s birthplace told AP. “After the American withdrawal the divisions between Sunnis and Shiites will get worse and worse.”

Sunnis were disproportionately represented in the anti-American insurgency after the cessation of major combat operations in the wake of the fall of Hussein in 2003. Now, ironically, many are concerned that they will suffer discrimination when US troops leave.

Guido Steinberg from the German Insitute for Intenrational and Security Affairs thinks complaints of favoritism have some merit.

“The individual political parties that came off best in the internal political conflicts between 2005 and 2007 are naturally now trying to fill key positions in the military with their own men,” Steinberg told Deutsche Welle. “That means the Iraqi troops are unlikely to be an effective force.”

Al-Maliki is a former Shiite dissident. And Iraq’s geographical location, wedged as it is between predominantly Sunni Saudi Arabia and majority Shiite Iran, make the situation there particularly volatile.

“The fear is that Iraq’s neighbors will be forced into a position of competition against one another in the country, sponsoring political organizations that support their influence… [and] fostering conditions conducive towards a proxy conflict,” John Drake, an analyst with a British private security firm, told AFP.

Steinberg concurs with that assessment.

“The big unanswered question is how far Iran and Saudi Arabia will be able to use Iraq as a theater for the conflict between them from 2012 onwards,” Steinberg said. “We can see signs of that happening at the moment in Bahrain and even in Syria.”

Deadly attacks on police and government officials, often sectarian in nature, are daily occurrences in Iraq. It’s unclear how much influence the US could have, should the situation escalate, once its troops are no longer on the ground.

But with Obama heading into an election year, in which a successful outcome in Iraq would be a major trump card, the US is going to be keeping a keen eye on internal developments in Iraq.

The US has an interest in providing every sort of help the Iraqi government requested, Bensahel said.

“This is the period that will really demonstrate whether the eight-year intervention in Iraq has been sucessful or not in terms of providing something that is lasting and sustainable.”