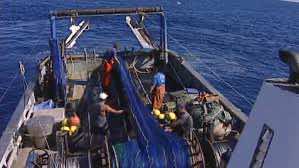 The Spanish fleet will face at least a shortfall of 30 million Euros after being obliged to leave the Moroccan waters following the veto of the European Parliament on the extension of the EU-Morocco fisheries agreement, said the Spanish government.

“The European Union must compensate the damages caused to the professionals of Spanish fisheries sector, which, according to a preliminary assessment, will exceed 30 million Euros for the two and a half months when they will not operate” in the Moroccan waters, Spanish minister of Environment, Rural and Marine Affairs, Rosa Aguilar, told a press conference in Brussels on the sidelines of the European Fisheries ministers meeting, convened following the European Parliament decision.

The fisheries agreement enabled some 120 ships of eleven EU countries to operate in the Moroccan waters in exchange of a financial contribution of 36.1 million Euros annually.

The European Parliament rejected, on Wednesday, by 326 votes against, 296 in favor and 58 abstentions, the extension of the annual protocol of UE-Morocco fisheries agreement, which has been entered into force provisionally since February 28, 2011.