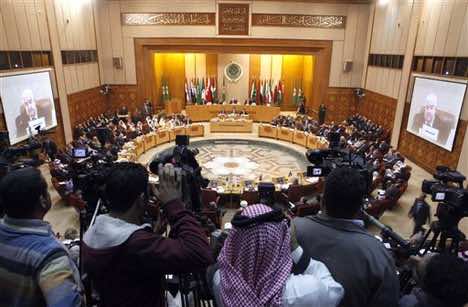 Arab League foreign ministers have postponed indefinitely their meeting that was to take place this weekend on responding to Syria’s proposal to admit observers in exchange for an end to regional  sanctions, the Arab League said late Thursday.

A meeting of the Arab task force in charge of the Syrian crisis will take place in Doha, instead of Cairo, on Saturday, added the Arab League’s number two Ahmed Ben Helli.

He also said that at the same time negotiations would continue aimed at getting Damascus to sign the Arab plan to protect Syrian civilians, including sending observers to Syria to try to end the deadly crackdown on dissent by the regime of President Bashar al-Assad.

On Thursday, the pan-Arab organization’s secretary-general Nabil al-Arabi again met in Cairo with representatives of the Syrian opposition.

Syria said on Sunday it will allow observers into the country as part of an Arab peace plan to end months of violence, in a bid to avoid sweeping sanctions the bloc decided to impose on the Damascus regime.

But its Foreign Minister Walid Muallem, in a letter to Arabi, said Syria would accept the monitors under certain conditions, including the lifting of sanctions the Arab League approved on November 27.