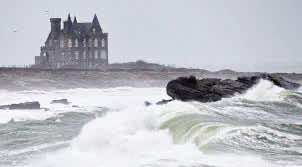 Storm winds and torrential rain lashed France on Friday, cutting off electricity supplies to hundreds of thousands of homes and sending a cargo ship aground off the northwestern Brittany coast, where it sprang a fuel leak.

There were no reports of injuries as dozens of people were evacuated from flood-prone zones on the western Atlantic coast and 400,000 households were deprived of power, French Interior Minister Claude Gueant said.

Wind gusts of up to 130 kph pounded France’s western coast in the early hours of Friday, causing a cargo ship headed for Malta, the 109-metre TK Bremen, to run aground off Brittany. The crew were rescued by helicopter.

French television showed footage of black fuel washing up on a sandy beach in Brittany, although the damage is expected to be limited because the leak was coming from one compartment in the ship’s supply of fuel, police said.

Maritime authorities were planning to deploy equipment to contain a 1-km slick and empty the stricken ship’s tanks of around more than 200 tonnes of fuel.

Early on Friday the storm’s heart hung over the northernmost Pas-de-Calais region of France and was headed eastward in the direction of Belgium, according to the latest update from France’s national weather service.