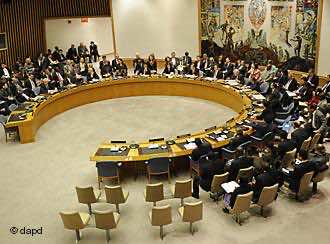 After blocking UN Security Council action on the violence in Syria for months, Russia has for the first time proposed a resolution that calls out Syrian authorities for its deadly crackdown on protesters.

Russia put forth a draft United Nations Security Council resolution on the violence in Syria on Thursday. Moscow has so far been viewed by the West as one of the major obstacles to a UN resolution on Syria.

The text condemns the violence from both sides, but includes a reference to “disproportionate use of force by Syrian authorities.” It does not, however, call for sanctions.

In October, Russia and fellow veto-wielding China voted against a European draft resolution that threatened sanctions.

The new text singles out the Syrian authorities “in a number of instances,” according to Russia’s UN Ambassador Vitaly Churkin and has raised hopes that the council can find consensus and issue its first resolution of Syria’s nine-month crackdown on protesters.

Western nations had rejected two previous Russian drafts they said unacceptably attempted to assign blame equally to the government and the opposition.

The UN says some 5,000 civilians have been killed by the crackdown while Syrian President Bashar al-Assad says gunmen have killed 1,100 of his forces.

Europe and the US welcomed the emboldened rhetoric and expressed home that a council resolution backed by Russia, Syria’s longstanding ally, could have an effect on the conflict. Diplomats said, however, that Russia had not gone far enough.

“Hopefully we can work with the Russians, who for the first time at least are recognizing that this is a matter that needs to go to the Security Council,” US Secretary of State Hillary Clinton said.

Germany’s UN Ambassador Peter Wittig said the proposal was a sign the council was finally engaging on the violence in Syria “in a serious manner” but described the text as “insufficient.”

Assad’s family has held power in Syria for four decades. Protests first erupted against the regime in March, inspired by other protest movements and revolutions in the Arab world.

There are growing fears the country could be slipping into civil war and on Thursday the Syrian Observatory for Human Rights activist group said Syrian army deserters killed 27 soldiers in and around the city of Deraa in some of the deadliest attacks against Assad-loyal forces yet.

Troops were reported to have been commanded to stop the demonstrators ”by all means necessary, including lethal force.”