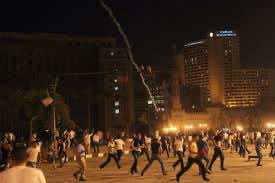 Clashes between Egyptian security forces and protesters against continued military rule have killed eight people and wounded another 299, the health ministry said on Saturday.

“The toll from incidents on Friday outside the cabinet offices reached eight dead and 299 wounded,” said Adel Adawi, an aide to the health minister quoted by state news agency MENA.

A previous toll put the dead at three and injured at 257.

Security forces moved to retake control of the area around the cabinet offices early on Saturday, erecting razor-wire barriers on access roads, an AFP correspondent reported.

But after a few hours of calm, new clashes erupted pitting demonstrators against troops and police. Protesters hurled stones and petrol bombs, the correspondent said.