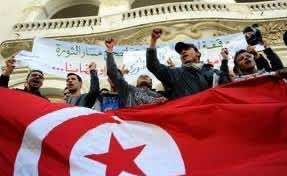 Thousands of Tunisians rallied on Saturday in celebration of the first anniversary of the popular uprising that toppled their long-standing dictator and unleashed the Arab Spring revolutions.

Newly-elected President Moncef Marzouki joined the crowds in the town of Sidi Bouzid, where a roadside fruit-seller’s altercation with a policewoman and his subsequent self-immolation on this day a year ago set off a wave of protests that have dramatically changed the Arab world.

“Thank you to this land, which has been marginalised for centuries, for bringing dignity to the entire Tunisian people,” said Marzouki, who was sworn in as president this week after the country’s first post-revolution election.

Mohamed Bouazizi, an unemployed university graduate, set himself on fire on December 17 last year to protest abuses under the 23-year regime of president Zine el Abidine Ben Ali, sparking a revolt that ousted the strongman less than a month later.

The fruitseller committed his desperate act in Sidi Bouzid, part of the neglected Tunisian interior long overlooked for investment by the former regime in the north African country, which held its first free elections in October.

From dawn, Tunisians swarmed into Sidi Bouzid, where the streets were decked with Tunisian flags, pictures of people who died during the uprising and a giant photograph of Bouazizi.

“I look around me and see many young people in the crowd who braved the bullets of Ben Ali’s police last year to defend the values of freedom and dignity,” human rights activist Sabrine Ammari told AFP.

The popular uprisings that spread across the Arab world throughout 2011 led to the ouster of Ben Ali as well as the leaders of Egypt, Libya and Yemen and triggered months of deadly protests in Syria.