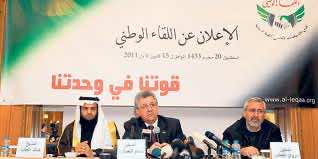 Leaders of Syria’s largest opposition movement met behind closed doors in Tunisia on Saturday to discuss ways of accelerating the downfall of President Bashar al-Assad.
Tunisia is hosting a three-day meeting of Syrian opposition groups formed before and since the launch of the March uprising against Assad’s regime.

Burhan Ghaliun, the leader of the Syrian National Council, which is widely regarded as the main opposition coalition, has told AFP discussions centre on accelerating the toppling of Assad and putting “an end the daily killings”.

The revolt against Assad’s regime has resulted in more than 5,000 deaths, according to the United Nations. The opposition talks are being held in a hotel on the outskirts of the Tunisian capital and a Syrian source told AFP they would continue into Saturday evening.

“We need to unite the opposition and make it stronger. We need to emerge from this congress with a higher level of organisation, clearer targets and more momentum,” Ghaliun told AFP on Thursday.

Tunisian President Moncef Marzouki, who attended the first day of talks on Friday, said in a television interview that he was against foreign intervention to stop the bloodshed in Syria.

The SNC includes opposition figures of all stripes, including committees running protests in Syria, the Muslim Brotherhood, as well as Kurdish and Assyrian parties.

However, a former Syrian ambassador to Sweden announced the creation of his own National Alliance Thursday in Istanbul, claiming his group was the most representative of the uprising and that the SNC had “lost contact with local revolutionary movements in Syria”.

Syrian army deserters have formed their own group, which they call the Free Syrian Army. That group has been in contact with the SNC.