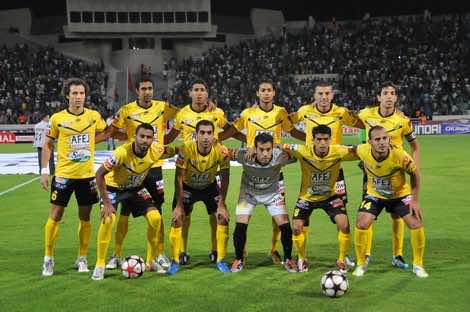 The Maghreb Association Sportive of Fez (MAS) was the lucky winner of the 2010-2011 Throne Cup final played on Saturday in Rabat between Maghreb of Fez and CODM of Meknes. The winning goal was scored at the 75th minute by Brazilian Luis Jefferson who had entered the game 3 minutes earlier, as he replaced his teammate El Ayyati.

The 1 – 0 victory, made it the third time that MAS has won the Throne Cup after it played in 11 finales and losing 8. MAS was less fortunate last year when it played its tenth final and lost to FUS of Rabat. The first Throne Cup won by MAS was in 1980.

Today’s win comes 23 years after its second title achieved in 1988.

This is the second time that the two teams played each other in the Throne final. The first time was in 1965, when Meknes’ CODM defeated Fez’ MAS, winning its first title ever.

The Throne Cup is the second title that MAS has won in two weeks, after winning its first continental title a fortnight ago.

MAS won the 2011 CAF Confederation Cup after defeating Tunisia’s Club Africain in a 6-5 penalty shootout, following a 1-1 aggregate at the end of the return leg final, which was played in Fez on Sunday December 4, 2011.

MAS became the fifth Moroccan club to win the CAF Confederation Cup after the Kawkab of Marrakesh, Raja of Casablanca, FAR and FUS of Rabat.

As occurred last season, the winner of Throne Cup was also the winner of the CAF  Confederation Cup. Last year, FUS of Rabat won the Throne title against MAS a few weeks before it was crowned champion of the CAF Confederatoin Cup, when it defeated Sfax of Tunisia 3-2 in the return leg final played in Sfax.