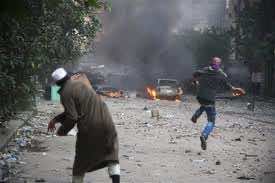 Clashes between demonstrators and police rocked central Cairo on Sunday, in the third straight day of violence which has left 10 people dead and some 500 wounded.

Demonstrators hurled stones and pieces of metal over a concrete wall erected by police on a wide avenue leading from Tahrir Square, focal point of the protests, to the seat of government, where clashes erupted early Friday, an AFP journalist reported.

A group entered the premises of the nearby Institute of Egypt, which was set alight the previous day, to recover ancient manuscripts, some of which were burned.

The institute for the advancement of scientific research was founded in 1798 during Napoleon Bonaparte’s expedition to Egypt.

The clashes were the deadliest in weeks and overshadowed the count from the second phase of the first parliamentary elections since the overthrow of veteran president Hosni Mubarak in February.

The health ministry said late on Saturday that the violence had killed 10 people and wounded 500 since Friday.

Prosecutors ordered that 17 people arrested on Saturday be remanded in custody for four days.