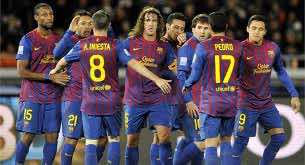 Lionel Messi grabbed a brace as a rampant Barcelona out-classed the Brazilians Santos 4-0 to lift the Club World Cup on Sunday and confirm their status as the best team on the planet.

The clash between the European and South American champions in Japan had been billed as a showdown between Messi, widely acknowledged as the best player in the world, and 19-year-old Brazilian sensation Neymar.

In the event, it was no contest — either between the two supreme talents or their teams — as Barcelona picked up their second world crown after winning the competition in 2009.

Messi, set up by Xavi, got the first after 17 minutes, before Xavi put Barcelona 2-0 up just seven minutes later to put them firmly in control, as prodigious forward Neymar struggled to get a sniff of the ball.

Cesc Fabregas, who pulled the strings in midfield, got the third on the stroke of half-time as the Spanish champions, who were at full-strength, threatened to run riot for the full house of 68,166.

Messi got his second eight minutes from time as he rounded the keeper to roll the ball in after the influential Dani Alves threaded the ball through to him.

Barca, who lost striker David Villa to a fractured shin in Thursday’s semi-final, had the better of an open first 15 minutes, Messi forcing a save out of Rafael Cabral after skipping a couple of half-hearted Santos challenges.

Shortly after that the Argentine was at it again, taking a dinked pass from Xavi and lifting the ball delicately over Cabral from just a few yards out to put the Catalans into an early lead at the International Stadium in Yokohama.

It was all Barca, so it was no surprise when they went further ahead on 24 minutes, full-back Alves driving down the right wing and cutting inside to set up Xavi, who rifled the ball past a horribly exposed Cabral.

Still Barca and Messi kept coming. On 26 minutes he was denied by a terrific last-gasp tackle when through on goal, and three minutes later Fabregas struck Cabral’s near post after he was set up by Xavi.

But Fabregas and Barca would not be denied, as the former Arsenal man grabbed the third just before half-time after more good link-up play — including an audacious back-heel — from the irrespressible Messi.

Less than a minute after the restart they should have gone 4-0 up when Fabregas, set up by Messi, saw his prodded effort on the run saved by Cabral, then Neymar went up the other end and headed over when he should have scored.

Belatedly, the Brazilian side were up for it after their coach Muricy Ramalho had sent them out onto the frigid pitch well ahead of their opponents.

Neymar should have found the net when clean through on goal just before the hour, but Victor Valdes saved well with his legs. It summed up the teenager’s night.

Earlier, Al Sadd, who lost 4-0 to Barcelona in the semi-finals, beat Japanese champions Kashiwa Reysol 5-3 on penalties to take third place at the annual intercontinental tournament.