By Edmund Blair and Marwa Awad 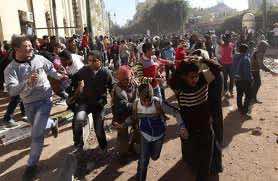 By Edmund Blair and Marwa Awad

Egyptian security forces fought opponents of army rule in Cairo for a fourth day on Monday and the United States, worried by the violence, urged the generals to respect human rights.

Medical sources said the death toll had risen to 13 since Friday, when clashes erupted. Hundreds have been wounded.

Police and soldiers using batons and teargas drove stone-throwing protesters out of Cairo’s Tahrir Square, hub of the uprising that ousted Hosni Mubarak in February, overnight.

Hundreds had returned to the square by morning after security forces retreated behind barricades in streets leading to parliament, the cabinet office and the Interior Ministry.

U.N. Secretary-General Ban Ki-moon condemned the “excessive” force used against the demonstrations that have widened a rift among Egyptians over the role of the army and cast a shadow over the country’s first free election in decades.

The violence broke out just after the second stage of a six-week election for Egypt’s new parliament that starts the slow countdown to the army’s return to barracks. The military has pledged to hand power to an elected president by July.

U.S. Secretary of State Hillary Clinton said she was “deeply concerned” about the violence and urged the security forces “to respect and protect the universal rights of all Egyptians.”

In a statement to a nation which has received billions of dollars in U.S. military and other aid, she also called on protesters “to refrain from acts of violence.”

An army source said 164 people had been detained. A security source said a 26-year-old man had died in custody, although the cause of death was not immediately clear.

State news agency MENA said the public prosecutor had detained 123 people accused of resisting the authorities, throwing rocks at the army and police, and setting fire to government buildings. The prosecutor had released 53 others.

Many Egyptians want to focus on building democratic institutions, not street activism, but have nevertheless been shocked by the tactics of security forces in and around Tahrir.

Soldiers in riot gear have been filmed beating protesters with batons even after they have fallen to the ground. A Reuters picture showed two policemen dragging a woman lying on the street by the shirt, exposing her underwear.

Protesters said they had seized four soldiers who had been part of the attacking force in the early hours of Monday.

“We quickly got the four into vehicles and drove them away from the square, otherwise they would have been beaten to a pulp by angry protesters who experienced the army’s vicious attacks,” said Sayyid Abu Ella, speaking by telephone from Tahrir.

Late on Sunday, protesters had hurled petrol bombs at lines of security forces and chanted “Down with Tantawi” a reference to Field Marshal Mohamed Hussein Tantawi who heads the army council and was Mubarak’s defence minister for two decades.

Ban Ki-moon “is highly alarmed by the excessive use of force employed by the security forces against protesters, and calls for the transitional authorities to act with restraint and uphold human rights, including the right to peaceful protest,” the U.N. Secretary-General’s office said in a statement.

The violence has overshadowed the election that is set to give Islamists the biggest bloc in parliament.

The West, long friendly with Mubarak and other regional strongmen who kept a lid on Islamists, has watched warily as Islamist parties have swept elections in Morocco, Tunisia and now Egypt following this year’s Arab uprisings.

Hard-core activists have camped in Tahrir since a protest against army rule on November 18 that was sparked by the army-backed cabinet’s proposals to permanently shield the military from civilian oversight in the new constitution.

A small group of activists approached protesters hurling stones on Sunday and called on them to stop, but they refused, citing the deaths of 10 people as a reason not to “negotiate.”

Other activists handed over to the army people they said were making petrol bombs.

The violence has deepened the frustration of many ordinary Egyptians, who want an end to months of unrest that has left the economy in tatters.

“There are people who wait for any problem and seek to amplify it … The clashes won’t stop. There are street children who found shelter in Tahrir,” said Ali el-Nubi, a postal worker, adding the army should have managed the transition better.