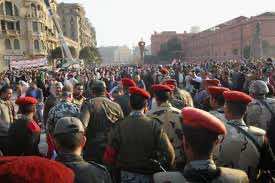 Egypt’s ruling military council, which took power when Hosni Mubarak was ousted in February, said on Monday it had uncovered a plot to burn down parliament.

General Adel Emara, a member of the Supreme Council of the Armed Forces, interrupted a live news conference to say that he had “received a call now to say that a plot was uncovered today to burn parliament and there are now large crowds in Tahrir Square ready to implement the plan.”

An AFP reporter in Tahrir Square said several hundred protesters were in the square attending an orderly funeral for one of the protesters killed in clashes.

On the outskirts of Tahrir, where a historic building containing national archives was destroyed in the clashes, protesters were trying to save any surviving documents, the reporter said.

Emara’s statement comes as one more person was killed in dawn clashes between protesters and security forces, taking the death toll from four days of fighting to 11.

The violence overshadowed the count in the first post-revolution vote that shows Islamists in the lead, and prompted calls for restraint from the United Nations and the United States.