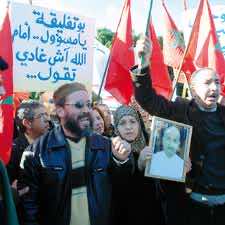 The Moroccans who were expelled by Algeria in 1975 called on Sunday on Algiers to find a solution to their plight through reparation.

The victims of Algeria’s forcible expulsion staged two sit-ins in Rabat in front of the UN office and Algeria’s embassy.

Following the protest, a letter was handed to the UN representative calling for the recovery of the victims legitimate rights and the reparation of the moral damaged inflicted by the expulsion.

“We have been calling upon the Algerian government to restore our rights,” said the vice-president of the associations of the Moroccan victims of Algeria’s expulsion.